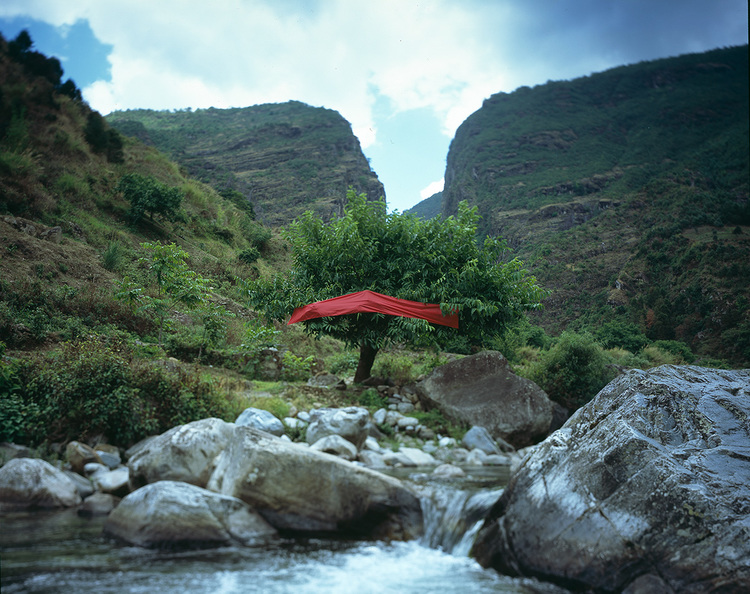 Through striking red banners hung by the Chinese government, future evictees of Shanghai’s poor neighborhoods are asked to welcome the wrecking ball of progress as a social improvement, not a potential life catastrophe. The government doesn’t hang banners in upscale shopping districts or blocks of high rent towers, just the grim neighborhoods of the urban poor who stand in the way of more malls and condos.

This juxtaposition is the subject of French photographer Eric Leleu‘s project, Subtitles. But not only does Leleu document these contrasts, he takes them one step further by satirizing the practice with his own banners.

[…]Subtitles is broken into three “chapters,” the first takes a direct look at official Communist Party banners that hang in the side streets of Shanghai’s poorest neighborhoods – the bureaucratic slogans become menacing gashes amidst crumbling homes, empty alleys and the promise of worse to come. In his second chapter, Leleu riffs on the government’s use of banners by fabricating his own, printing alternative slogans on them and hanging them himself. Photographs in the third and final chapter show blank red banners strung up in rural settings, a silent cry from nature far away from the political noise of urban China. [Source]

Following is a description of Subtitles from Leleu’s personal website, where many of his photographs can be viewed:

No country in the world produces as many kilometers of propaganda banners as China. In the countryside, in cities, along highways and in the most unexpected places, they are ubiquitous. Following the thirty glorious years of the Cultural Revolution, each era brings its abundance of educational slogans. Given the growing indifference of a society that losing its moral landmarks and civic sense, these slogans that float to the four winds in silence only serve to provide a false sense of comfort to the local government officers who wrote, printed and installed them.

Eric Leleu decided not to let them pass in silence! He began recording them exactly according to the instructions of the New Topographics, studying via photography these ‘man-altered landscapes’. No matter whether you can read them or not because the meaning is not what is written on these red banners. It could be post-it notes stuck on a landscape, red Stickies. Or it could be stuck there to hide a scar, a wound, a cut, a rash, that which we prefer not to show. This systematic survey is emphasized by frontal compositions, with the banner placed at the center, as if the surveyor wanted to hammer it home, to put points on the i. A warning! A red stain! That’s it. The strength of this photographic survey is in its ability to “alter” a landscape.

Please move forward. Nothing to see. No Photo! [Source]