Will Drones Increase Chances of Conflict in Asia? 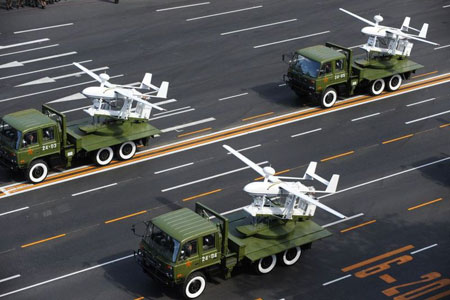 With China pushing to bolster its drone program, a new article in Foreign Policy by the Center for a New American Security warns of the dangers such a program would pose in Asia. The Diplomat’s James Holmes considers whether drones make a conflict in the region more or less likely:

Drones pose the opposite problem from submarine proliferation. Rather than striking unseen, they’re relatively straightforward to detect. Hence the Sino-Japanese incident over the Senkakus. But what do you do once you’ve detected an unmanned aircraft in airspace you claim? Send out combat planes to escort it away? Its operators may say no. In effect they dare you to escalate. You can either lodge a diplomatic protest, which could prove ineffectual, or act forcefully to remove the threat. If the side dispatching the UAV is stronger militarily, you will have been maneuvered into a conflict in which you’re outmatched. Your prospects appear grim.

For Beijing, the logic of UAV operations resembles the logic of “small-stick diplomacy.” The unmanned aircraft is like a fishing vessel exercising its right to ply its trade in sovereign waters, or an unarmed maritime enforcement ship patrolling those waters. It appears inoffensive, yet it’s there. Refrain from acting, and you’ve let an opponent establish a presence — a stepping stone to control — on disputed ground. Act, and you justify countermeasures from a stronger adversary that can portray itself as the aggrieved party.

A tough problem, aloft as at sea. Understanding is the first step toward wisdom — and effective countermeasures. [Source]

Xinjiang a “Frontline Laboratory for Surveillance”

The ‘Perfect Police State’ is Emerging in Xinjiang