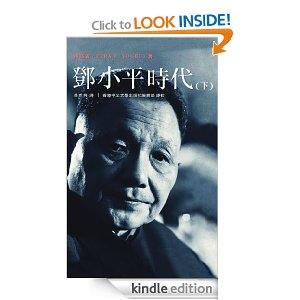 Many directors and studios in Hollywood have faced, and often succumbed to, pressure from Chinese censors to edit films before releasing them in China. In the New York Times, Andrew Jacobs reports that a similar dynamic is at work in publishing houses, when foreign authors find sensitive passages from their books removed in the Chinese translation. Ezra Vogel’s recent biography of Deng Xiaoping, for example, had several sections removed, including details about the 1989 crackdown, and about media censorship. From Jacobs’ report:

Mr. Vogel, a professor emeritus at Harvard, said the decision to allow Chinese censors to tinker with his work was an unpleasant but necessary bargain, one that allowed the book to reach the kind of enormous readership many Western authors can only dream of. His book, “Deng Xiaoping and the Transformation of China,” sold 30,000 copies in the United States and 650,000 in China.

“To me the choice was easy,” he said during a book tour of China that drew appreciative throngs in nearly a dozen cities. “I thought it was better to have 90 percent of the book available here than zero.”

Such compromises, almost unheard of just five years ago, are becoming increasingly common as American authors and their publishers are drawn to the Chinese market. With a highly literate population hungry for the works of foreign writers, China is an increasing source of revenue for American publishing houses; last year e-book earnings for American publishers from China grew by 56 percent, according to the Association of American Publishers. Chinese publishing companies bought more than 16,000 titles from abroad in 2012, up from 1,664 in 1995.

[…] Even if the process remains opaque and unpredictable, publishing executives say the broad outlines of China’s censorship regime have changed little in recent years. Topics that deal with ethnic tensions, Taiwan and Falun Gong, the banned spiritual movement, are off limits, and books that contain even a passing reference to the Cultural Revolution or contemporary Chinese leaders can expect fine-toothed scrutiny. [Source]

The article also mentions several authors, including Hillary Clinton, who removed their books from the China market after discovering censorship.

In recent years, the Chinese government has attempted to impose their own censorship regime on international book fairs, most notably at the Frankfurt Book Fair in 2009 when authorities tried, unsuccessfully, to pressure fair organizers to disinvite two dissident Chinese authors.