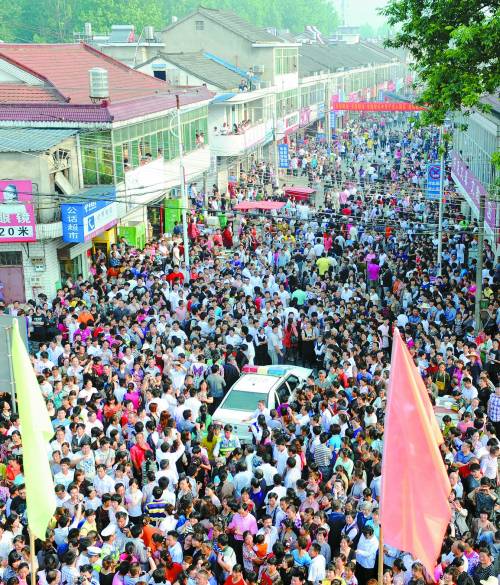 Because Chinese parents often expect their children to become family breadwinners, the pressure to perform is intense. Faced with the gaokao’s high stakes and frustrating unpredictability, tens of thousands of test takers choose to sit through the ordeal again, when their scores fall short of their — or their parents’ — expectations. Having already graduated from high school, some of these re-takers hunker down at home for a year to study. Others attend cram schools like Maotanchang High School, which lies tucked away in a small town in the mountains of central China’s Anhui province and specializes in the dark art of military-style test prep. With an annual enrollment of more than 10,000 students, the school, known as Maozhong, has earned the dubious honor of being called “China’s Largest Gaokao Factory” in Chinese state media.

A Sept. 18 article in China Youth Daily, a Beijing-based newspaper, offered an inside look at the topsy-turvy economic and social life of this exam-obsessed town. The piece, which incited a debate on the benefits and drawbacks of the gaokao system, immediately became popular on Chinese social media: One thread discussing the article on Sina Weibo, a Twitter-like platform, has gathered more than 20,000 retweets and more than 5,800 comments.

[…]The article describes schedules that run from 6:10 a.m. to 10:50 p.m., with students’ waking hours consumed by endless lectures and repetitive practice exams that abate only for two 30-minute meal breaks and one hour of downtime. (Some teachers have suggested a scheduled bathroom time for “easier management.”) According to the article, one year in Maozhong’s cram program can reportedly cost up to $8,000, roughly three times the average annual disposable income in Anhui. [Source]

The students who spend nine months in Maotanchang—at Moutanchang High School and nearby Jin’an Middle School—preparing for China’s notoriously grueling college entrance exam have become the force that drives the local economy in the small Anhui township. China.org.cn reports:

Maotanchang is a small town located in the southeastern part of Liu’an City. With its township area of only 3.5 square kilometers, the original population of the town is about 5,000.

When school starts again every August, the resident number in the area surges to some 50,000, over 20,000 among whom are middle school students; another 10,000 are accompanying parents from nearby towns and cities.

[…]”The entire town lives on the two schools,” said Yang Huajun, office director of the local government, “For us, these two schools are not only core of Maotanchang, but also the engine which can stimulate the local economy.”

With more and more nonlocal parents moving to the small town, the hotel and real estate industries have undergone great development in recent years.

The average annual rental rate has now gone up to more than 12,000 yuan, with the cheapest place going for some 4,000 yuan; the most expensive ones will cost you more than 20,000 yuan a year. [Source]

Also see the original September 18 article on Maotanchang from the China Youth Daily [zh]. For more on the gaokao college entrance exam, see prior CDT coverage.