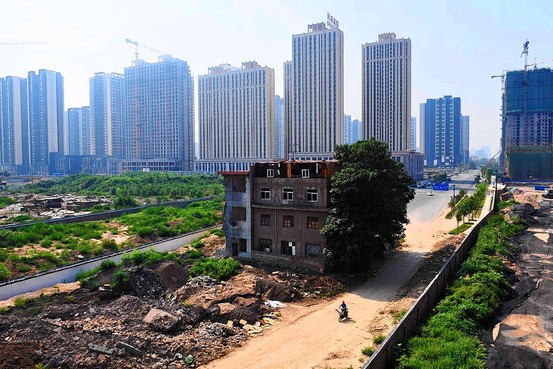 Amid a renewed commitment to urbanization from China’s new leadership, a recent survey by Tsinghua University shows how much of China’s population is being directly affected by continued development. From the Wall Street Journal:

As many as 64 million Chinese households have had their land seized or their homes demolished during a decades long building boom, a study said, throwing an uncomfortable light on the dark side of the country’s urbanization process.

China’s new generation of leaders, which took office in March, has championed urbanization as an engine of economic growth. China’s urbanization rate, at 53%, remains low by international standards. Bringing more workers from the agricultural sector into more productive work in cities could help lift China’s economic growth rate, which in 2012 fell to its slowest pace in more than a decade.

But the country’s urbanization carries a social cost. About 16% of Chinese households covered in a survey by Beijing’s Tsinghua University have seen their land expropriated or their homes hit by the wrecking ball at some point.

[…] China’s farmers don’t have the right to sell land themselves, and are often at the mercy of local authorities who seize land for development projects, often with little concern for compensation. The issue is a frequent source of friction between farmers and local governments. [Source]

China Daily’s coverage of the Tsinghua survey notes that many farmers face difficulties after being relocated:

One in 10 people who took part in the study said they had access to social insurance in cities where they were relocated.

Of the people who said their homes had been demolished,  94 percent received compensation, while less than 2 percent received support in finding a job and 21 percent were covered by urban social insurance, the report said.

[…] Yang Zaiming, a lawyer who specializes in demolition lawsuits at Beijing Shengting Law Firm, said many local governments tend to underestimate the value of land requisitioned from farmers.

Farmers sometimes must pay extra money to get an apartment of a similar size in cities after governments take away their houses and land.

“Without land, a house and the coverage of social insurance, many farmers are struggling,” he said. “The cost of living is also much higher in cities.” [Source]

The land grabs and forced demolitions that come with continuing development plans often lead to local outrage and protest by farmers and villagers. Last week, AP reported on a violent skirmish between villagers and police in Guangji village, Yunnan province:

Villagers in southern China have attacked policemen who were seeking a pair of suspects, injuring 27 officers.

The official Xinhua News Agency says the injured officers were hospitalized, including one in critical condition.

A new report from the BBC notes that the standoff in Guangji continues, and provides background on the provincial project behind the conflict:

The villagers are fighting to save their farm land from provincial developers who are building a $3.6bn dollar tourist attraction on the site.

[…] Guangji is a 30-minute drive south of Yunnan’s capital, Kunming. Twelve villages shared the farm land that is earmarked for the province’s new “Ancient City” project, a vast recreation of traditional Chinese buildings dating back to Yunnan’s ancient Dian Kingdom, which began in the 4th Century BC.

The project, which has high-level support from Yunnan’s Communist Party leaders, is slated to cover approximately 20,000 acres, say the villagers.

Half of that land has already been claimed by the project’s developers. The people in Guangji are fighting to protect 4000 acres of land that lies closest to their homes, while nearby villages are pitching in to try to save the rest. They too, have seen their share of violent confrontations with the authorities in recent months. [Source]

In other cases, angry locals have taken to more drastic measures of protest. After He Mengqing, a Hunan farmer allegedly dissatisfied with government compensation for his land, set himself on fire last week, NPR’s Frank Langfitt filed a report on the countrywide rise of self-immolation in protest of land-grabs:

In order to turn China into an urban nation, local governments have demolished tens of millions of homes over the past decade. Homeowners have often fought back, blocking heavy machinery and battling officials.

In recent years, resistance has taken a disturbing turn: Since 2009, at least 53 people across China have lit themselves on fire to protest the destruction of their homes, according to human rights and news reports. [Source]

PBS broadcast an interview with Langfitt, including video footage of He’s soon-to-be demolished house with the farmer burning inside:

In a recent blogpost, Xi’an based Fulbright scholar Andrew Stokols notes how a combination of urbanization and attempts to exert control over resource-rich borderlands are affecting nomadic ethnic minorities in western China:

While China’s efforts to forcibly relocate farmers to new cities does not target ethnic minority areas specifically, the policy has unique consequences because such populations are even less prepared for the move to urban life than their Han counterparts.  In border regions of China: in Xinjiang, Qinghai, Yunnan, and Gansu provinces for example, efforts to urbanize nomadic peoples are proving difficult and controversial.  Human Rights Watch estimates that 2 million Tibetans have been moved as part of similar programs in Tibet alone.

[…] While China’s urbanization has been concentrated in eastern coastal cities, current plans aim to increase the pace of urbanization in western regions in order to boost GDP and living conditions.  However, programs to urbanize and “settle” semi-nomadic groups are also part of China’s longstanding efforts to solidify control over border regions rich in natural resources and land.  Already the influx of Han settlers into Tibet and Xinjiang is making these groups increasingly marginalized, even in their own “autonomous” prefectures and counties.  In Tongren, development in the county seat is expanding into the surrounding countryside, and the small city is bustling with hotels and workers pouring in from the surrounding villages to sell thangka paintings to tourists. [Source]

In a post for China Dialogue, Stokol has written further on urbanization in western China. The post highlights contradictions in government claims that relocating farmers and grazers would prove environmentally beneficial:

Even when economic gains do not materialise, the government continues to justify relocation policies based on environmental benefits. Environmental immigration subsidies, or shengtai yimin, have been implemented since 2000 to move herders and farmers off of land that is ecologically sensitive, ostensibly to slow the trends of deforestation, declining water resources, and loss of grassland environments. A 2002 revision of the Grassland Law made it easier for the government to relocate herders due to presumed overgrazing.

Of course, the paradox at the heart of this idea is that the major cause of such worrisome environmental trends is overwhelmingly the resource strain caused by rapid urbanisation and climate change, not excess grazing or farming.

Moving herders off sensitive grasslands, or down from the mountains may seem like good environmental policy. But living in apartments, they will use more energy and produce more waste than ever before, outweighing any benefits achieved from reduced grazing or farming. And that’s partly the point: new urban residents will pay higher utility costs and higher taxes, a boon to local government coffers. [Source]

See more on urbanization and resettlement in China’s west via CDT.