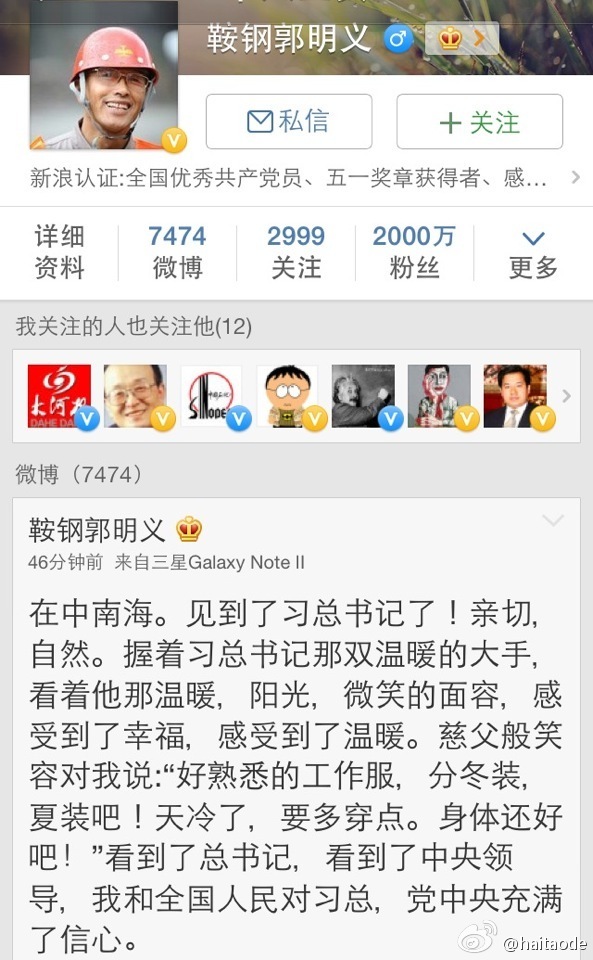 @鞍钢郭明义: In Zhongnanhai. I’ve met Secretary-General Xi! Amiable, natural. Shaking those two warm hands, looking at his warm, sunshiny, smiling face, I felt happiness, I felt warmth. He said to me with a smile like a loving father, “I’m familiar with your work clothes. There are winter and summer suits, right? It’s getting cold. You should wear a little more. Have you been well?” Having met Secretary-General  Xi, having met the central leader, I and people all around China are full of confidence in him and the Party Central Committee.

Other netizens chimed in to mock Guo:

@阿晓得啦: I always thought that only General Kim Jong-il had the smile of a loving father.

@网易新闻客户端: So-called “backbone” means that having two bones hurt your attacker when you’re attacked. “Being opportunistic” means that when the time is right, you sell the titles of father and mother, regardless of the buyer’s age. So-called “treason” means singing a song, starting a website, and shouting out loud the slogans of “loving the country and the people.” Yet without support or the people’s money, no one would do any of this.

@独立调查员007: Guo Mingyi, who the hell gave you the right to represent me? Even if you don’t think it’s disgusting, I think it’s embarrassing. Fuck off!

@小天童邪: I think Guo Mingyi is the image of a modern Lei Feng that the Party wants to portray, but he has become the laughingstock of the Party instead. People nowadays are not as easy to fool as people of the Lei Feng era. A truly good person does not need deliberately flatter and model.

@太史公春秋: Jia Zhangke: They’ve all gone–if you have enough capital, or if you are confident in your skills, then emigrating is really a good choice. Once you’ve left this piece of land, you don’t have to “love the country” anymore. You’ll see much of disgusting news, because no matter how much more disgusting the foreigners may be, you probably won’t care.

飝跃瘋人院：They have all lost confidence in Guo Mingyi’s “loving daddy”.