Why Patients in China Kill Their Doctors 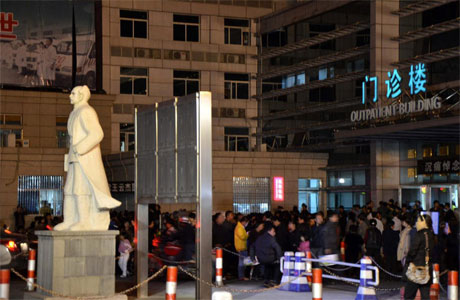 Following a patient’s stabbing of three doctors last week at a Zhejiang hospital and the staff protest that ensued, Zhang Jin at Caixin Online looks at some of the causes behind increasing violence against medical personnel, including stretched resources, overcrowded hospitals, financial stress and heightened expectations.

On the surface, the knife-wielding murderer is to blame. Many have been found to have histories of personal problems and paranoia.

But there are deeper reasons. Amid economic growth and technological advances made in recent years, some in society have high expectations for the medical services they deserve. In their view, a doctor should be able to cure a disease after a trip to the hospital.

What they do not understand is that medicine is still an extremely complex field. Many treatments involve risks, and failures are not necessarily the doctor’s fault. As one veteran doctor said: “Too many promises have been made regarding modern medical treatment of diseases.”

Sometimes doctors cannot live up to those expectations. To go one step further, the public’s lack of understanding regarding how the medical field operates has created a mistrust of medical professionals. [Source]

The strained relationship between doctors and patients has prompted the Ministry of Public Security to strengthen hospital safety and crack down on patient violence. China Daily reports:

In a circular released on Thursday, the Ministry of Public Security said police departments should step up their examination and guidance of efforts made by hospitals to ensure workers’ safety and to curb assaults on employees.

“No matter for what reason, or with what approach, organizations or individuals are banned from disturbing order in hospitals, harming the safety of medical workers, damaging hospital property or infringing on the rights of patients,” the ministry said.

[…] The ministry said it will support efforts by several other agencies to resolve disputes and strengthen patrols at hospitals.

[…] The ministry and the National Health and Family Planning Commission released a guideline last week on hospital security, which requires a hospital with 3,500 workers or 2,000 beds to have at least 100 security guards. [Source]