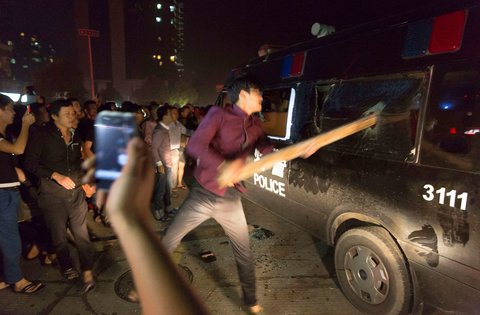 Typhoon Fitow landed in southeastern China last week, devastating many populated regions. Over the weekend, residents of flooded Yuyao, Zhejiang province gathered in protest after state-run television reported that all had returned to normal in their hard-hit city. On Tuesday, further protest broke out, and authorities have since dispatched riot police to Yuyao. Reuters reports:

On Tuesday, residents of Yuyao city massed in front of the local government headquarters, denouncing what they decried as inadequate relief efforts and demanding the local Communist Party secretary and mayor step down.

[…]Large numbers of riot police stood guard in the city of 1 million on Wednesday morning, according to photos posted by a Chinese rights group, Civil Rights and Livelihood Watch. The founder of the group, Liu Feiyue, told Reuters he had received the photographs from residents.

Party officials dismissed allegations of inaction and state media appealed for an end to the unrest in the city near the East China Sea coast in Zhejiang province. [Source]

During the 2012 Beijing floods, social media played an important role in organizing grassroots emergency response and allowing citizens to voice their concerns about government reaction to the disaster. The New York Times’ Didi Kirsten Tatlow looks at netizen commentary to the government’s inadequate emergency relief and subsequent security crackdown in Yuyao:

“There was no trace of them during the disaster, but to ‘restore stability’ they came down from above like God’s army.”

The online comment, by someone going by the name “Sweet Child in Heavenly Music,” suggested how some residents of Yuyao felt about the floodwaters, and later the soldiers, that swept into their town and surrounding counties in the eastern province of Zhejiang starting last week, culminating in large-scale protests on Tuesday at perceived government inaction to the natural disaster.

[…] Tuesday’s protests came in response to word of mouth and swelled with an Internet appeal, [local resident] Ms. Shi said.

“Urgent from Yuyao, now we appeal to everyone online to support the Yuyao people who are now confronting paramilitary forces in the government square,” the appeal ran. By late Tuesday it appeared to have been erased from the Internet.

Residents had five questions and demands, according to a list circulating online: […] [Source]

While netizen activity may have instigated mobilization in Yuyao, the ongoing crackdown on “online rumors” likely limited wider online response to the floods. CDT earlier posted search terms related to the riot in Yuyao that are currently blocked on Sina Weibo.

Also see a recent Huffington Post essay by Jeffrey Wasserstrom looking at the historical relationship between political mobilization and natural disaster in China, or a post from China Dialogue noting that rapid urbanization along with the effects of climate change are increasing the threat of urban flooding.