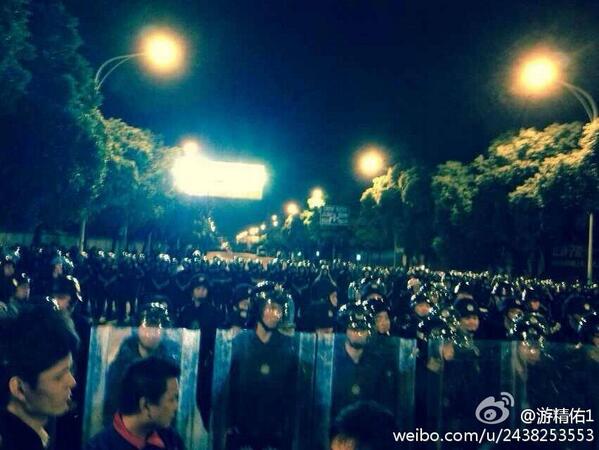 Anger at the official response to historic flooding in Yuyao, Zhejiang mounted over the weekend, spilling into street protests yesterday. Riot police were sent in today, and the city has calmed down. One resident told the New York Times: 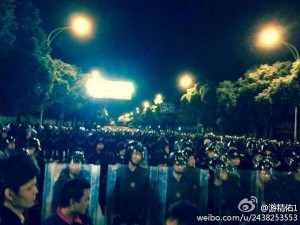 Riot police in front of the Yuyao government on October 15. (@游精佑1/Weibo)

“Everything is back to normal,” said a 24-year-old bank employee in Yuyao who gave her surname as Shi, speaking by telephone. “People protested yesterday, but it’s calm now. Power and all that kind of stuff are back. Students are back at school. The floodwaters are gone from town,” she said, adding she had been under pressure from her employer not to take part in the demonstrations. [Source]

Typhoon Fitow brought a half-meter (1.64 feet) of rainfall to Yuyao.

The recent crackdown on online rumors and “Big Vs” seems to have impacted the online response to the flood. A search for “Yuyao” (余姚) on Sina Weibo currently returns about 204,000 results. By contrast, Weibo posts about this April’s earthquake in Sichuan numbered in the millions.

As of October 16, the following search terms are blocked on Sina Weibo (not including the “search for user” function).