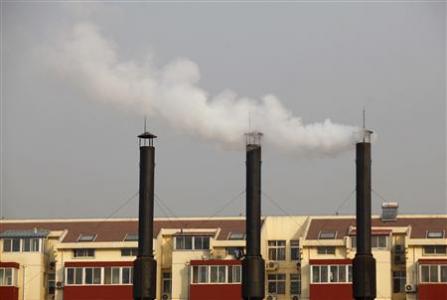 Heavy smog descended over northern China last weekend, trapping hundreds of thousands of people on their way home as the week-long national holiday came to an end. From Xinhua News Agency:

As of 10 a.m., traffic police authorities had closed down six interprovincial expressways, including roads linking the capital with Harbin in the northeast, Shanghai in the east, as well as Tianjin and Hebei Province.

[…] The foggy weather has wreaked more havoc on the road, as expressways, that open for free during the holiday, are already under heavy pressure. [Source]

Frustrated by pollution and record-setting crowds at tourist sites, some people have again brought up the idea of abolishing the seven-day holiday, known as the “Golden Week.” From Adrian Wan and Keira Huang at South China Morning Post:

The overwhelming coverage in mainland media about the golden week seemed to be negative, with endless complaints ranging from traffic jams, bad service, overcharging at parks and resorts, thuggish rogue tour guides, and tourists misbehaving at home and abroad.

[…] “Golden week is not a good thing for either consumers or the tourism sector,” said Professor Song Haiyan, of Hong Kong Polytechnic University’s school of hotel and tourism management. “Every year it creates problems. This year, overcrowding was a particular issue.”

In Song’s view, the solution would be to implement a paid leave system. [Source]

The heavy pollution in Beijing also disrupted sports events, including tennis and golf tournaments that required extended time outdoors. From Louise Waitt at the Associated Press:

On Beijing’s biggest weekend of the year for sports so far, spectators at the China Open tennis tournament and an inaugural ladies golf tournament pulled their shirts up over their faces and used masks and bandanas to try to avoid the noxious air.

“It’s not ideal in terms of pollution,” the world’s No. 1 men’s tennis player, Novak Djokovic, said after overcoming the smog and Rafael Nadal to win his fourth China Open title.

“Yes, we’ve been talking about the weather conditions, but it is what it is, it’s something that has been the same for the last few years that I’ve been coming back here,” the Serbian told reporters at a post-match news conference. [Source]

The Ladies Professional Golf Association (LPGA) stated on its website that it was to postpone the tournament in Beijing due to “low visibility.” The game resumed shortly afterwards despite still hazardous weather conditions, triggering criticism that LPGA was being irresponsible toward the players’ health. From Adam Minter at Bloomberg:

Fog — real fog — has delayed LPGA events in the past (as recently as in June at the U.S. Women’s Open in Southampton, New York), and thus it’s entirely possible that the LPGA was making a sincere effort to deal with low visibility, rather than the negative health effects of the air. Yet the fact that the LPGA resorted to using the state-owned Chinese news media’s long-time favorite means of downplaying the dangers of smog — simply label it “fog” — suggests the association may have known the scope of the problem and decided to minimize it. That doesn’t exactly show a commitment to player and spectator health and safety. As detailed on the U.S. embassy’s website, the effects of breathing what by 9:55 a.m. had been officially downgraded to “very unhealthy” air include:

“Significant aggravation of heart or lung disease and premature mortality in persons with cardiopulmonary disease and the elderly; significant increase in respiratory effects in general population.”

That’s an improvement over the “hazardous” air that players and spectators would have been breathing at 8 a.m. But it still doesn’t reflect favorably on the LPGA, which has shown that nothing — not even the health of its star players — is so important as the financial benefits of establishing itself in China’s golf market. Toward that end, it certainly didn’t hurt that early Sunday evening Shanshan Feng won the tournament. [Source]

Amid widespread complaints and public criticism, the Beijing government is taking some steps to deal with the pollution:

China will replace four coal-burning heating plants in the capital Beijing with natural gas fired ones by the end of next year as it steps up efforts to clean up pollution, the official Xinhua news agency reported on Saturday.

The report, citing the city’s Municipal Commission of Development and Reform, said the four plants and some 40 other related projects would cost around 48 billion yuan ($8 billion)and cut sulphur dioxide emissions by 10,000 metric tons. It did not detail the related projects. [Source]