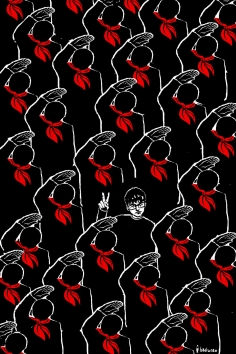 The South China Morning Post Magazine profiles mainland Chinese cartoonists and explores how they individually deal with censorship of their work. One of the interviewees is CDT’s contributing cartoonist Badiucao, also known as “Let’s Draw David” or “Pedro.” The article also interviews Wang Liming (aka Rebel Pepper), Kuang Biao, and Liu Jun:

The medium, however, means much more to another enthusiast. “Drawing a cartoon is a process for me to conquer fear,” says “Let’s Draw David” from Shanghai, who declines to reveal his real name and asks instead to be called Pedro.

[…] His cartoons have a distinctive personal style. They are made up of just four colours – black, white, red and green – which, he says, represent darkness, hope, the Communist Party and the army, respectively. These four elements, he adds, represent the social phenomena that have inspired his work.

Pedro’s blog, qiwen.lu, features all of his cartoons and news updates. Earlier this year it won the best Chinese blog award from German international broadcaster Deutsche Welle “for its use of a humorous approach to comb [through] and present Chinese news”.

When asked to comment on cartoonists in the mainland who self-censor, Pedro, who works as a kindergarten teacher in Australia, says: “I can understand, but not agree with them. Freedom of expression is never taken for granted. You fight for it … or you give it up for your enemy.” [Source]

See Badiucao’s cartoons for CDT so far. We will post a Q&A with the artist later this week.