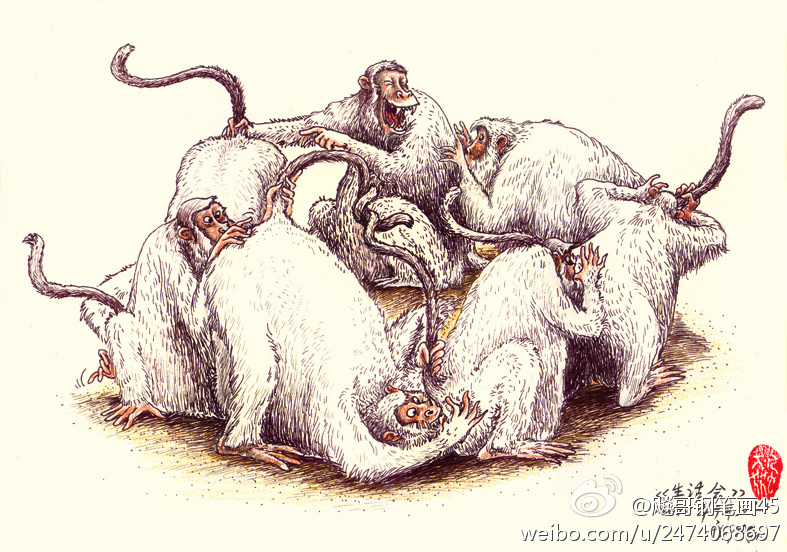 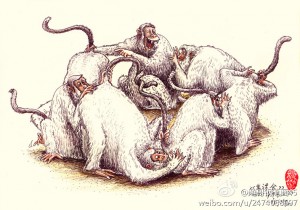 The chrysanthemum licking party is at it again. (Kuang Biao)

The central government’s “Party mass line education activities leading group” issued a notice around the beginning of October requesting the leading cadres of Party committees at all levels to take the lead in “pointing out your faults, aiming your questions at crucial points, and making an example of yourself to the group.” These instructions arrive in the midst of the intra-party “criticism and self-criticism” campaign lead by Xi Jinping. Some netizens wanted to know what good “pointing out faults” will do if officials continue to refuse to publicly disclose their assets. A number of Chinese citizens have been arrested in the past few months after publicly calling for official financial disclosure.

西北面的老西: Their Oscars are forthcoming.

One netizen wrote an imaginary criticism session among military heroes who served the warlord Liu Bei during the Three Kingdoms period (220-280 C.E.), memorialized in the classic novel Romance of the Three Kingdoms:

withinrain: Guan Yu: “I criticize Zhang Fei. Although he makes sure his soldiers are warm and fed, he usually talks in a rough voice and looks very mean. It’s not good for grassroots unity.” Zhang Fei: “I criticize Zhao Yun. He always fight the enemies by himself. Although his achievements are brilliant, he is too individualistic.” Zhao Yun: “I criticize Guan Yu. Wasn’t your horse Red Hare a gift from Cao Cao? Not to mention that it exceeds standard equipment and breaks the “Regulations on Government Horses.” Guan Yu: “Damn it, don’t you know how to play the game?”

四维氏族: Such a trend… Is the Cultural Revolution still far away??

CELESTIAL-BENG: You can play at self-criticism among yourselves, but if the masses criticize you, you’ll turn against us–and if you still take it seriously? They’ll arrest you!

风不渡: The leaders told the weasel to reflect every day on stealing chickens. So every night it blames itself constantly while eating those chickens.