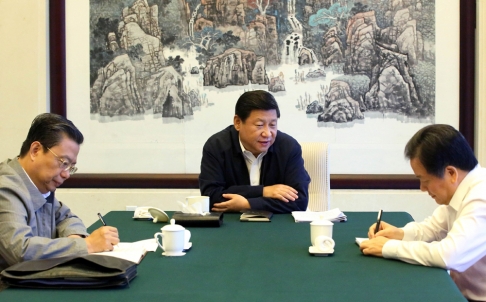 President Xi Jinping’s administration so far has been marked by a harsh clampdown on official corruption and extravagance, together with a crackdown on free expression and the Internet. For China Media Project, Qian Gang analyzes a phrase, “public opinion guidance,” used by Xi in an August speech, which has slowly been gaining traction in the official media:

[..O]n August 30, the People’s Daily ran an article attributed to the People’s Daily editorial board” (人民日报编委会) that cited the need to “effectively channel public opinion and actively launch a public opinion struggle.” This was the first time since the newspaper’s inception in 1946 that an article was attributed in such a way. The article, presented as a study of the August 19 speech, was called: “A Scientific Guide to Consolidating and Strengthening Mainstream Ideology and Public Opinion” (巩固壮大主流思想舆论的科学指南).

This term that “makes people uneasy” had now appeared in a lengthy study of the August 19 speech in the official People’s Daily.

After that, these lengthy readings came one after the other. On September 4, the People’s Daily ran an article from Xinhua News Agency chief Li Congjun (李从军) called, “Firmly Grasping the Initiative in Public Opinion Work” (牢牢掌握舆论工作主动权). The principal viewpoint in this piece, that “[the Party must be] confidence and courageous in its positive propaganda, [carrying out] the public opinion struggle with a clear banner,” became the headline on many of the websites that re-posted it.

[…] Li Congjun’s piece also made it clear that new media were a priority battlefield in the struggle. “Newly emerging public opinion positions,” he wrote, referring to new information platforms, “have already become the chief battleground in the public opinion struggle, and their importance and status in the overall news and propaganda framework is ever more obvious.” [Source]

In a follow-up post, China Media Project points out that the movement against constitutionalism has made its way to the highest levels of official media, the People’s Daily:

In a piece called “Leaders Must Enhance the Strength of Their Political Convictions” (领导干部必须增强政治定力) run in yesterday’s edition of the People’s Daily, Yuan Chunqing (袁纯清), the top leader of Shanxi province, directly criticized liberalism, democratic socialism, universal values and “Western constitutionalism and democracy.” These ideas, he said, “are wrong ideas intended to throw China off the track of socialism and break it away from the leadership of the Chinese Communist Party.” [Source]

As part of the crackdown and in another sign of what CMP calls China’s “politically turbulent times,” Xi Jinping has been holding self-criticism sessions with local leaders, sometimes broadcast on TV. The South China Morning Post reports on his recent tour of Hebei:

Xi has participated in four separate half-day meetings with standing committee members of Hebei’s provincial party committee since Monday, Xinhua reported yesterday. The president listened as the officials criticised their own conduct, laid out major problems and set down plans for rectification, the state news agency said.

“Every member of the standing committee in the provincial party committee made self-criticisms and heard criticism by other comrades at the meetings,” Xinhua said.

Such sessions are time-honoured Communist Party tradition and have been employed frequently over the decades by leaders seeking to fix party problems and enforce discipline. The tour follows Xi’s call for party officials to follow a “mass line”, a Maoist leadership model stressing a close connection with the grass-roots. [Source]

The Los Angeles Times has more on the CCP tradition of self-criticisms and the current campaign:

Self-criticism, the Communist Party’s equivalent of group psychotherapy, is a venerable tradition that has largely lost steam since the 1966-76 Cultural Revolution, when people denounced themselves and one another, donning dunce caps and delivering beatings. Although party members are still required to practice self-criticism, it has been in recent years largely pro forma. In fact, they can buy self-criticism essays online if they don’t know what to say.

The trick is to identify a fault that sounds plausible but not too embarrassing. In the session Wednesday, the task involved senior party officials in Hebei province’s capital, Shijiazhuang, 200 miles southwest of Beijing.

Cadres said that the Hebei Communist Party secretary didn’t pay enough attention to poor people and that their provincial governor wasn’t patient and didn’t listen attentively when they delivered their work reports.

“I always felt my opinion was right. I put myself above others. I liked to criticize others,” the governor, Zhang Qingwei, said on television. [Source]

And from the Australian:

This week [Xi] has appeared on television, conducting such sessions for provincial cadres, starting in Hebei, which surrounds Beijing.

An official photo shows him in open-necked shirt, arms folded, leaning watchfully on a desk at which members of the Hebei party standing committee are writing self-criticisms.

The broader implication is clear: this is what the new leadership perceives as political reform. It does not involve increased accountability or democracy but a sharpened and cleaner team at the top, more responsive to direction. [Source]

In China where the CPC serves as a long-term ruling party, criticism and self-criticism have become critical sources of ideas and political dynamics but a series of obstacles have blocked actual implementation. The international scenario has been severe , despite relief at the beginning of China’s reform and opening-up. However, the Internet has shaped China’s public opinion in a dramatic way in recent years. Though there are no opposition parties, the Chinese society has witnessed plenty of “opposition opinions,” leading to a situation where a number of Party members are hesitant about criticism and self-criticism.

Chinese authorities must be able to conduct criticism and self-criticism consistently in a complicated environment of diverging opinions. Meanwhile, they are supposed to stimulate public confidence in their governance to maintain national interests.-

The majority of those holding opposite views have the same ultimate interests as the basic objectives of state politics. There are complex causes for their resistance against the ruling party, so long-term criticism and self-criticism by officials will help soften their stance and change their opinions.

Nevertheless, many Chinese Internet users have continued to express their diverging opinions. From the South China Morning Post:

Yet Chinese readers quickly pointed out that it was really a campaign of “praise myself and others” judging by the “flattering” tone of some criticism and the doomed-to-fail nature of the campaign.

“This whole campaign is a perfect example of bureaucracy,” a microblogger wrote.

“Why don’t they start criticising the size of their bank accounts and personal assets?,” another one suggested. The comment was immediately seconded by others.

Jokes and parodies of the campaign have became instant hit on Weibo this week and were reposted thousands of times. [Source]

Read more about the current campaign of self-criticisms from the South China Morning Post.