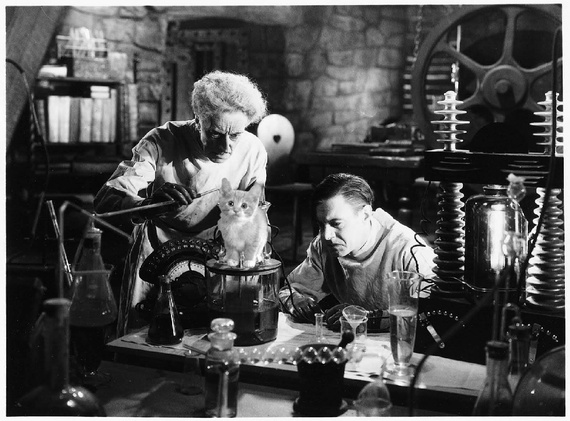 The Atlantic’s Rebecca J. Rosen describes surprising new archaeological findings on early domestication of cats over 5,000 years ago in what is now Shaanxi province:

Now, these farmers had a bit of a problem: rodents. Archaeologists at the village of Quanhucun found an ancient rodent burrow that led right into an ancient grain storage pit. Storage vessels found at the village feature angles and slippery surfaces, design elements that seem to indicate an intention to protect the contents from thieving zokors. Rodent bones from the site contain evidence of millet consumption. “Clearly those rodents were eating the farmers’ grains,” Marshall said.

But the farmers had some help in their battle against the rodents: cats.

[…] Cats, Marshall explained, are very hard to find archaeologically, in part because humans do not tend to eat them. “What we mostly excavate from ancient homes and villages is the garbage. And we’re just not going to find many cats,” she said. Furthermore, it was a surprise to come across cat bones in China, as most of the existing evidence shows early cats in Egypt and around the eastern Mediterranean. Furthermore, modern genetics has shown that today’s house cats are more closely to related to Middle Eastern wildcats than any other. Research is still being done on the DNA of the Shaanxi cat bones to determine whether there is any relationship, perhaps via an early trans-Asian trade route, between these ancient cats and the popular pet. [Source]

The new study does not reveal whether it mattered at this early stage if the cats were black or white.