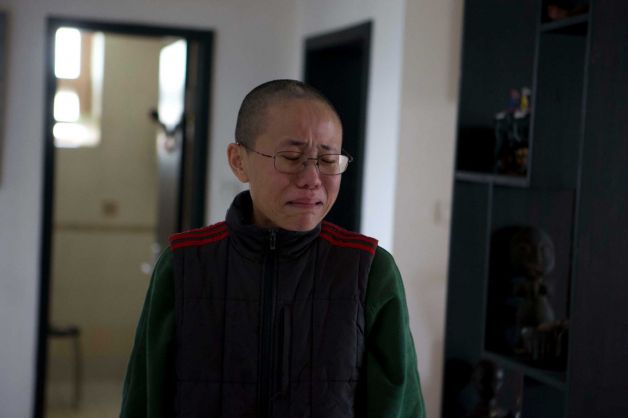 Liu Xia, the wife of Nobel Peace Laureate Liu Xiaobo, has issued requests to see a doctor, read her husband’s letters, and make a living. Liu Xia is suffering from depression as a result of being held under house arrest since her husband was awarded the Nobel Prize in 2010.  Associated Press reports:

The requests conveyed Tuesday by a close friend depict the psychological, emotional and financial pressure Chinese authorities have imposed on Liu Xia, a soft-spoken poet and artist, in retaliation for the activism of her jailed husband.

Chinese activist Zeng Jinyan, who has been a close friend of the couple for many years, said in an interview that she was expressing Liu Xia’s requests on her behalf. They include seeing a doctor outside of the state-run medical system, allowing her imprisoned husband and her to read letters that they have written to each other, and the ability to work and support herself.

“She’s quite depressed,” Zeng said. “The family brings her medication but they don’t know how effective it is because no doctor has seen her.”

Zeng added that Liu Xia was concerned that a state-appointed doctor or one whom she sees under the supervision of her minders might put her in a mental hospital that would worsen her isolation from the outside world. [Source]

On her blog website, activist Zeng Jinyan provides details of the requests she is conveying on Liu Xia’s behalf:

I am Zeng Jinyan, I arrived in Hong Kong from Beijing in the early hours of this morning. I am relaying the following requests from Liu Xia in an individual capacity:

1. I request the right to consult a doctor freely.

I propose that an internationally renowned psychologist from Medecins San Frontieres meet one-on-one with Liu Xia to conduct a consultation. Liu Xia was diagnosed with coronary disease in the 1990s. The imprisonment of first her husband and then her brother, as well as constant house arrest has led to a rapid deterioration in her mental state. She has persistently refused to seek medical treatment under the watch of the police, as she fears the authorities will use her this as an excuse to throw her into a psychiatric hospital.

2. I request that Liu Xiaobo and I are allowed our rights to read correspondence we write to each other.

Although Liu Xiaobo and Liu Xia write to each other, it has been extremely hard for them to read the letters from one another. [Source]

A video documents several individuals’ attempt to visit Liu Xia at her home in Beijing on December 28, 2012. [youtube]http://www.youtube.com/watch?v=V4kh3ArRAio[/youtube]

A joint letter from the Human Rights Watch, Amnesty International, and the American PEN Center asked Vice President Biden to raise Liu Xiaobo and Liu Xia’s case during his visit to China on Wednesday. From Human Rights Watch:

Your visit is timely, coming on the heels of an announcement by the Third Plenum of the Chinese Communist Party Central Committee that calls for the abolition of the reeducation through labor system, the relaxation of the “one-child” policy, and, more important for Liu Xiaobo’s case, the improvement of the judicial system—a notoriously weak institution in the People’s Republic of China—“to “protect human rights.” The Chinese Supreme Court followed this announcement with an announcement of its own, demanding that judges bar confessions obtained through torture and calling for less interference from the local government. In Beijing, you will have an important opportunity to press Chinese interlocutors to take concrete steps to realize these pledges.

[…] We understand that there are a plethora of important issues that you will be discussing when you are in Beijing, but we hope that this will be one of them. Please continue to raise Liu Xiaobo’s case at every available opportunity, and demand that authorities end all forms of repression and intimidation of his family, including freeing Liu Xia from extralegal house arrest. [Source]

See also a letter by Liu Xia that has recently emerged, via CDT.