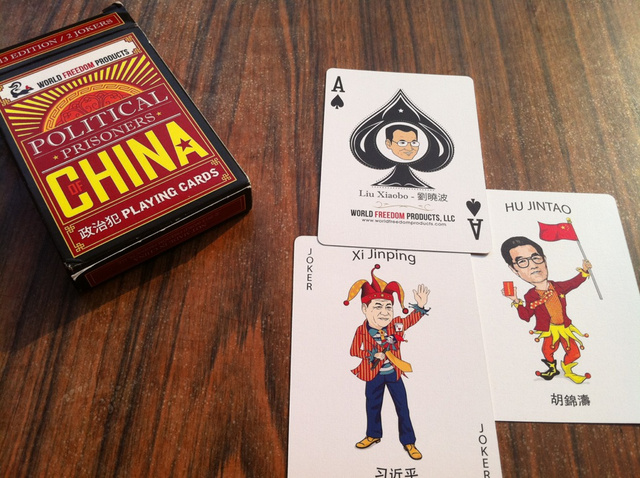 “This was really a labor of love,” [creator Grant] Shepard said, describing how he’d return from work at 5ish, put the kids to bed, then coordinate with two designers in Indonesia from 9 pm to 2 am. There was lots of trial and error. There were interviews with human rights experts, facilitated by Rick Halperin of Southern Methodist University and Jennifer Holmes of University of Texas at Dallas (who’s a board member on the Bill of Rights Defense Committee). A pool of 100 Chinese dissidents was whittled to 40, and finally to 13, one for each card value from 2 to King, with a special image for the Ace of Spades.

[…] Peering off the laminated cards are the likes of Tan Zuoren, who petitioned the government following the 2008 Wenchuan Earthquake; Shi Tao, who disclosed state secrets and was ratted out by Yahoo; and lesser-known individuals including 1989 Tiananmen demonstrators, minority leaders, religious dissidents, writers and bloggers. All the dissidents are peaceful, Shepard noted. The Ace of Spades is Liu Xiaobo, the 2010 Nobel laureate who is five years into an 11-year sentence for subversion.

[…] “I think it’s a good way for people to know prisoners in China,” Wang said. “But actually, this set only includes 13 people—that’s too few. Fifty or 40 would be okay. With only 13, the choices can be questioned.” [Source]