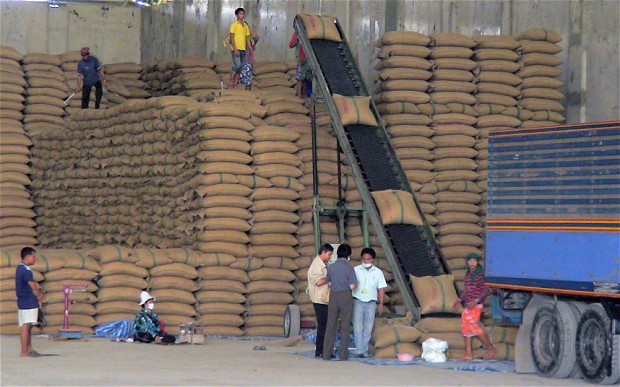 China has cancelled a deal to buy more than a million tonnes of rice from Thailand due to a probe into the government’s subsidies for rice growers, caretaker Commerce Minister Niwattumrong Boonsongpaisan said on Tuesday.

He said the company was afraid it would run into problems due to an investigation by the National Anti-Corruption Commission (NACC).

Thailand is in the grips of a debilitating and intermittently violent political crisis, after months of protests by anti-government protesters who despise Yingluck and her brother, former PM Thaksin Shinawatra. An early election on Sunday was widely disrupted as protesters blocked access to polling stations; the opposition Democrat party, which boycotted the vote, is asking the Constitutional Court to annul the results.

The rice subsidy plan—part of a sweeping slate of government subsidy programs that Yingluck and Thaksin have showered on the rural voters that make up their base—has been a costly disaster, as Quartz has reported. The guarantee that the government would buy rice at above-market prices has gutted Thai rice exports, and created a 16 million tonne stockpile that will either be sold at an enormous loss or rot away. Thailand’s National Anti-Corruption Commission is conducting an investigation into Yingluck for her involvement in the subsidy scheme, which could lead to criminal charges or impeachment. […] [Source]

Reuters focuses in on how China’s cancelled deal is yet another blow to the embattled Thai government’s attempts at raising funds to pay the rice farmers whose votes brought the prime minister to power in 2011:

The cancellation will add to the pressure on Thailand’s government, which is struggling to secure funds for the rice scheme at a time when farmers who have not been paid are protesting in the provinces.

[…] The deal between Thailand and Chinese state enterprise Beidahuang was signed on November 20, for delivery starting in December. The shipment was delayed, however, after Prime Minister Yingluck Shinawatra dissolved parliament in December.

[…] The government is desperate to get funds for the scheme because some farmers who have sold grain to the state have been waiting for months for their money.

[…] The Chinese cancellation is the latest in a series of setbacks for Yingluck, who campaigned on the rice scheme to win support in the vote-rich north and northeast, where many households live off income from rice farming. [Source]