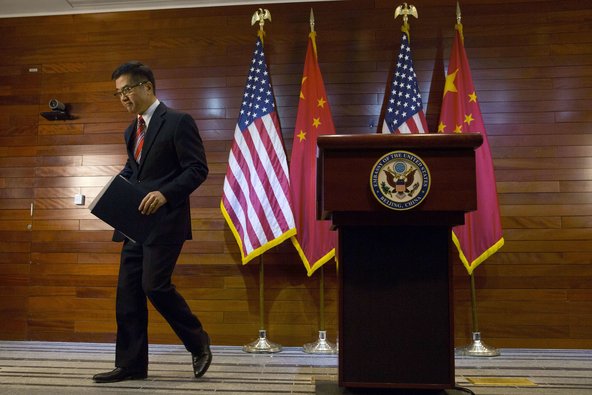 “His carefully chosen words were not well received by the state-run China News Service. Following Mr. Locke’s remarks, it published a scathing review of his tenure modeled after a famous August 1949 essay by Mao Zedong, “Farewell, Leighton Stuart,’’ slamming the last American ambassador under the collapsing Nationalist government in Nanjing. Gary Locke is a U.S.-born, third-generation Chinese-American, and his being a banana — ‘yellow skin and white heart’ — became an advantage for Obama’s foreign policy,’’ opened the commentary, written by a person identified as Wang Ping. (Many Asian-Americans consider “banana” an offensive term.)

“However,” the commentary continued, “after a while, a banana will inevitably start to rot.’’

The “rot’’ included Mr. Locke’s trips to restive regions of Tibet and Xinjiang, in China’s far west, which stirred an “evil wind,’’ the commentary continued. Like other essayists with a nationalist bent, Wang Ping also took aim at Mr. Locke’s portrayal as a humble person who carried his own bag and flew economy class. Such gestures, which the commentary cast as insincere, were broadcast widely on China’s social media when Mr. Locke first arrived in Beijing in 2011 and won him admiration from many Chinese, who couldn’t imagine their own officials abandoning their privileges.

[…] “When Gary Locke arrived, the skies in Beijing became hazy,’’ the commentary said. “When he left, the skies suddenly became blue.’’ [Source]

At The Diplomat, Zheng Wang describes how Mao Zedong’s 1949 condemnation of Leighton Stuart has played a role in negatively impacting state media reporting on Locke:

In 1949, Chairman Mao wrote a famous article on Stuart called “Farewell, Leighton Stuart,” which is included in official middle school textbooks in China. Mao associated Stuart with the United States’ “cultural aggression” in China. Mao was worried about Stuart’s influence, particularly on intellectuals. And history sometimes repeats itself, because much of China’s official media often use the term “United States’ cultural aggression” to refer to Gary Locke’s actions in China. For instance, Locke carried his own luggage when he arrived in Beijing and he took economy class flights when traveling in China, which embarrassed the Chinese government. Chinese state media believes that such actions were part of a strategy to make the Chinese people compare Locke with corrupt Chinese officials. It is interesting that the behaviors of two different ambassadors from two different time periods were both called cultural aggression by official Chinese media. This indicates that Beijing still lacks confidence and worries about people, especially intellectuals, being influenced by America’s culture and values, in a way that could be dangerous for the Chinese government. [Source]

Update: Indeed, ABC News reports via the Associated Press that China News Service’s official comments on Locke’s departure did little to influence “shocked members of the Chinese public, who denounced the editorial as distasteful and offensive.”   In his farewell speech, Locke stressed his ancestral ties to China while emphasizing his American identity. From Edward Wong at The New York Times:

Throughout his two-and-a-half-year tenure, Mr. Locke made it a point to stress to ordinary Chinese that his ancestors were from the southern region of Taishan in Guangdong Province. He visited his ancestral village of Jilong three times as ambassador. In the Thursday news conference, he mentioned the Taishan region twice, but he ended the session with an unambiguous statement on his national allegiances.