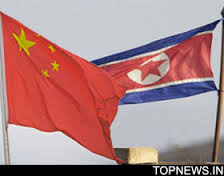 After a  year-long investigation, a United Nations panel handed a report to the UN Human Rights Council on human rights issues in North Korea, and notified Kim Jong-un that he could personally be held accountable for crimes against humanity in his country. China was quick to raise issue with the UN report and the idea of international prosecution of human rights violations. From the New York Times:

Hua Chunying, a Chinese Foreign Ministry spokeswoman, called the report “unreasonable criticism,” raising questions as to whether Beijing will use its United Nations Security Council veto power to block any action on the matter.

[…] There appears to be little immediate prospect of winning approval for International Criminal Court prosecution, however. Approval is necessary from the Security Council’s permanent members, which include North Korea’s longtime ally China, and Beijing’s remarks suggested that it was opposed to strong action, although officials did not address the issue of China’s using its veto power. [Source]

Coverage from the BBC summarizes the human rights situation in North Korea, as alleged by the UN panel report:

The report says that in North Korea:

“In many instances, the violations of human rights found by the commission constitute crimes against humanity,” the report said. [Source]

While Foreign Ministry spokeswoman Hua rejected the report’s criticism, she remained silent on whether or not China planned to use its Security Council veto power to block any potential UN action. Reuters reports:

Hua would not answer what she said was a “hypothetical question” on whether China would use its veto powers if the report was brought to the U.N. Security Council for further action. Diplomats have said China will most likely block any such proceedings.

Asked why China blocked U.N. investigators from going to the North Korean border, across which many North Koreans cross illegally, Hua said she could not comment and would have to look into the matter. [Source]

The New York Times’ Austin Ramzy has more on China’s refusal to allow UN investigators into border regions of northeastern China, and on the report’s criticism of China’s treatment of North Korean refugees:

The report by the panel to the United Nations Human Rights Council on said Monday that the Chinese government had declined to allow investigators access to areas of northeastern China where large numbers of North Koreans live and work.

[…] The voluminous documentation of the panel’s report was focused on the responsibility of Mr. Kim’s government, but it also outlined areas where it said Beijing was failing to meet its responsibility to refugees under international law. The report stated:

Despite the gross human rights violations awaiting repatriated persons, China pursues a rigorous policy of forcibly repatriating citizens of the Democratic People’s Republic of Korea who cross the border illegally. China does so in pursuance of its view that these persons are economic (and illegal) migrants. However, many such nationals of the Democratic People’s Republic of Korea should be recognized as refugees fleeing persecution or refugees sur place. They are thereby entitled to international protection. […]