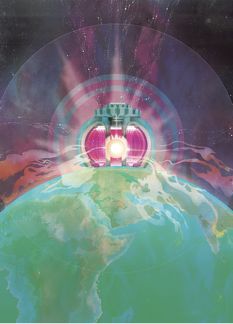 At The New Yorker, Raffi Khatchadourian mounts a long exploration of the International Thermonuclear Experimental Reactor and the quagmire of bureaucratic, political and technical difficulties surrounding it. China’s need for and work towards fusion power appears on the fringes of his story.

Sitting at his computer, [Guenter] Janeschitz [a senior adviser in the ITER director-general’s office] made his case for fusion: “In the next several decades, we have to replace oil, and in the next century we have to replace natural gas—and these two, taken together, represent sixty per cent of the total energy use of every country today. This is a huge amount of energy. To replace it would require many nuclear power stations, or coal-powered stations. Now, coal will be available for a long time, so coal is an option. China is building a coal-powered station almost every week—and that is just coal. But China also has an oil-usage growth of nine or ten per cent per year. This is an exponential curve. This is not sustainable. So we will see, at one point, an increase in the price of oil. When you have a barrel going for two hundred dollars or three hundred dollars, it will be felt throughout the world economies.”

[…] Janeschitz envisions a future in which thousands of commercial thermonuclear reactors will one day operate, with plasmas burning within: points of astral light across the globe. “In my opinion, you need very big fusion power to make it viable—two- or three-gigawatt power stations,” he told me. He believes that political will and imagination are the crucial factors in determining when this vision becomes reality. This belief, expressed in this way, is common among his peers, who often use “political will” as a synonym for money. South Korea has a lot of political will. At the moment, China is building a fusion-research facility, in Huainan, that resembles a small metropolis, with an Epcot-like orb at its center, and it is even designing a reactor prototype. As one ITER official joked, “We make a modification to ITER on a Friday, and by Monday they have added it to the design of their machine.” [Source]

The Hefei facility—the EAST, or Experimental Advanced Superconducting Tokamak (itself, Khatchadourian explains, short for the Russian toroidalnaya kamera s aksialnym magnitnym polem, or “toroidal chamber with axial magnetic field”)—achieved a major advance in plasma containment time last last year. Although mentioned only a handful of times in Khatchadourian’s piece, China’s efforts cast a long shadow over it in light of ITER’s litany of stops and false starts and the “hare and tortoise” progress of the Chinese space program.