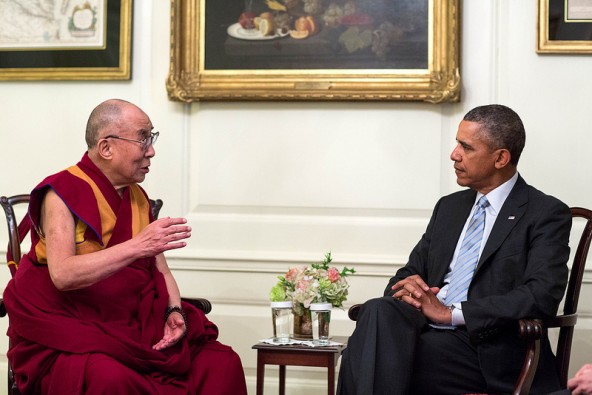 The White House has issued a statement on Friday’s low-key meeting between President Obama and the Dalai Lama:

The President met this morning at the White House with His Holiness the XIV Dalai Lama. The President reiterated his strong support for the preservation of Tibet’s unique religious, cultural, and linguistic traditions and the protection of human rights for Tibetans in the People’s Republic of China. The President commended the Dalai Lama’s commitment to peace and nonviolence and expressed support for the Dalai Lama’s “Middle Way” approach. The President stressed that he encourages direct dialogue to resolve long-standing differences and that a dialogue that produces results would be positive for China and Tibetans. In this context, the President reiterated the U.S. position that Tibet is part of the People’s Republic of China and that the United States does not support Tibet independence. The Dalai Lama stated that he is not seeking independence for Tibet and hopes that dialogue between his representatives and the Chinese government will resume. The President and the Dalai Lama agreed on the importance of a positive and constructive relationship between the United States and China. [Source]

The administration also released a single official photograph from the meeting: Photo from The White House

China’s Ministry of Foreign Affairs had warned of serious damage to Sino-U.S. relations following the meeting’s last-minute announcement, and urged the White House to cancel it. A Xinhua commentary on Friday complained that “either the White House is blindfolded by the Dalai Lama’s word game, or politicians are seeking once again to manipulate China with an unscrupulous old trick.” When the meeting went ahead, Chinese vice foreign minister Zhang Yesui summoned the U.S. embassy’s charge d’affaires Daniel Kritenbrink, Xinhua reports:

[…] “Such a move will gravely sabotage China-U.S. cooperation and relations, and will definitely undermine its own interests,” he said.

[…] Moreover, he demanded the United States to immediately take concrete actions to offset negative influence, stop interfering into China’s internal affairs by making use of Tibet-related issues, stop conniving and supporting anti-China secessionist activities made by the Dalai Lama and his followers.

“The United States must take concrete actions to regain trust of the Chinese government and people,” he said. [Source]

But China’s Global Times quoted Niu Xinchun, a research fellow with the China Institutes of Contemporary International Relations, who said that “a single incident could hardly shake the foundations of the Sino-US relationship.” Although Britain’s David Cameron faced a year-long diplomatic freeze after receiving the Dalai Lama in 2012, America has tended to skate over earlier visits without much disruption. There have been suggestions that the meeting was discussed during Secretary of State John Kerry’s visit to Beijing last week, and Reuters’ Roberta Rampton and Sui-Lee Wee reported that both sides appear keen to minimize turbulence:

Jonathan Pollack, an analyst with the Brookings Institution think tank, said it was extremely unlikely that China would takes steps such as canceling high-level meetings over the Dalai Lama’s visit, given there was so much at stake in U.S.-China relations.

“That would be, as the old Chinese proverb goes, lifting up a stone to drop it on your own feet,” he said.

“Obviously the Chinese are predictably and ritualistically agitated, but their words, compared to what they have said in the past, are, if anything, a little less sharp.”

[…] The choreography of Friday’s meeting – and the Chinese reaction – followed predictable patterns, said Douglas Paal of the Carnegie Endowment for International Peace.

“They’ve arranged it to be held in the same fashion, roughly, that it’s been held most times the Dalai Lama has come,” he said. “There’s no escalation.” [Source]

Friday’s meeting, like earlier ones in 2010 and 2011, was held in the White House map room, rather than the higher-status Oval Office. This time, although press secretary Jay Carney declined to confirm it as a concession to China, the doors remained closed. While the State Council Information Office ordered a tight rein on Chinese media coverage, the White House press corps expressed frustration at a lack of independent access, which added to simmering discontent at the administration’s opacity. From Politico’s Hadas Gold:

In previous visits to the White House, press were allowed in for a photo spray and the Dalai Lama spoke to reporters. This time, neither of those things happened. Instead, the White House released a photo of the two taken by the official White House photographer.

The White House’s tight control of media events has become a major source of frustration for Washington journalists. Late last year, several media organizations sent a letter to the White House accusing the administration of “blocking the public from having an independent view of important functions of the executive branch of government.” Representatives from several of those organizations met with the White House communications team in December. [Source]

While the meeting might not bring serious fallout between Beijing and Washington, it appears equally unlikely to lead to fresh talks between Beijing and Dharamsala, despite John Kerry’s appointment of a Special Coordinator for Tibetan Issues who will work towards the resumption of dialogue. At his Jottings from the Granite Studio blog, historian Jeremiah Jenne argued that China ought to overcome its distaste for the current Dalai Lama while it still can:

When Arafat died there were few tears in the Israeli government. Flash forward a decade later and in their darkest moments I think there are people in the security establishment who miss Yasser a little. Why? Because they may have hated the PLO Chairman with the white hot burning of a supernova but they knew him. He was a known quantity. They could, after a fashion, work with him.

[…] China faces a similar dilemma. They may hate the Dalai Lama but they know him. He knows them and, a little bit like Arafat, this incarnation of the Dalai Lama is relatively moderate compared with what is waiting in the wings.

Moreover, just as Arafat had the stature and the credibility to compromise with Yitzhak Rabin and Bill Clinton, it is possible that this Dalai Lama is the only figure in the Tibetan community who could work with Beijing and then sell a deal to the majority of Tibetans. He may only be the head of one sect of Lamaism, but his stature looms larger than that, and it definitely overshadows any possible successor.

[…] China needs to work with this Dalai Lama while it has the chance. This Dalai Lama preaches non-violence and there’s good evidence that his leadership has kept more extreme elements in check. He is moderate. He is a known quantity. He has expressed an interest in meeting with Chinese leaders. The time is now. Is China ready? [Source]