Minitrue: We’re All to Blame for the Smog 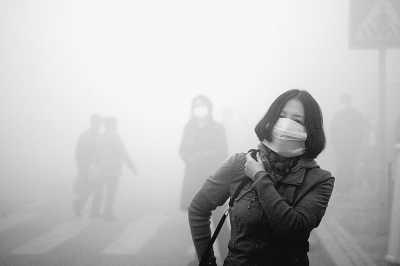 State Council Information Office: Websites in all localities are kindly asked to promote the article “When It Comes to Smog, We Cannot Blindly Point Fingers.” (February 25, 2014)

The article, first published in the Hebei Daily, argues against blaming big business and the government for air pollution [zh]:

Some people are pessimistic, assuming that it is beyond human capacity to control the smog–that it is better to wait for a breeze than to try to do anything. Others are fond of attacking the government, insisting that it is up to the authorities to take care of the smog. Still others shrug off any responsibility, arguing that “factories use so much more electricity than us,” and that “the pollution from private cars is a drop in the ocean…”

Who is ultimately responsible for the smog filling the air? Some say it’s from industrial manufacturing, others say it’s from car exhaust, and still others say it’s from our coal-dependent energy system… Before the results of an authoritative study are released, I’m afraid it’s difficult to resolve this debate. But one thing is certain: the close relationship between smog and the production and lifestyle of modernization. Since each and every one of us enjoys the material benefits of modernization, we should all assume the responsibilities and overcome the difficulties this modernity generates–we all are responsible for controlling the smog. No one is qualified to blindly point a finger.

The air pollution in northeast China is so severe that its affect on agriculture will resemble nuclear winter, according to a new study from China Agricultural University. A man in Hebei has sued the government for failing to stop the smog. Meanwhile, on ChinaFile, experts discuss how much blame the US may bear for China’s polluted air.