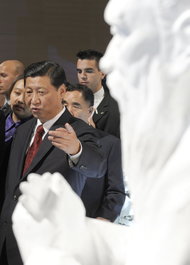 In a recent speech, President Xi Jinping hailed Confucianism as an antidote for his own country’s ills as well as for Western societies that have lost faith in capitalism. He also claimed that foreign universities were opening Confucius Institutes out of a desire to learn from China. From the New York Times’ Sinosphere blog:

“Some countries that have ideological prejudices against us have also opened up to Confucius Institutes,” Mr. Xi said in the speech to scholars in November, when he visited Confucius’s hometown, Qufu, in eastern China, according to Ta Kung Pao. The paper, which noted that Mr. Xi had also visited Qufu in 1992, published what it said was a complete transcript of his remarks. He said:

The reason is that, politically, their theory that capitalism is the ultimate has been shaken, and socialist development has experienced a miracle. Western capitalism has suffered reversals, a financial crisis, a credit crisis, a crisis of confidence, and their self-conviction has wavered. Western countries have begun to reflect, and openly or secretively compare themselves against China’s politics, economy and path.

His comments on Confucius Institutes appeared contrary to the Chinese government’s usual description of them as exercises in building friendship free of any political agenda. [Source]

Read more about Confucianism and Confucius Institutes, including a recent in-depth look at the institution by University of Chicago anthropologist Marshall Sahlins in The Nation, via CDT.