Xi and Obama Meet on Sidelines of Security Summit 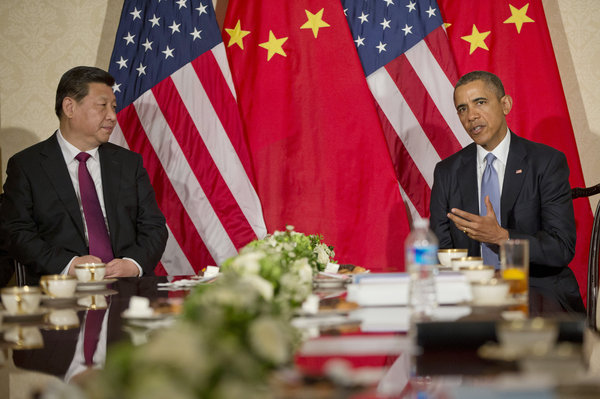 While meeting on the sidelines of the Nuclear Security Summit in The Hague on Monday, Presidents Obama and Xi expressed mutual appreciation and pledged cooperation before joking about First Lady Michelle Obama’s visit to China. Reuters reports:

Xi made a point of thanking Obama for U.S. help in searching for the missing Malaysian Airlines flight which had a large number of Chinese passengers. He said the two countries should address common challenges in a spirit of mutual cooperation.

“China is firmly committed to … building a new model of major country relations,” he said, according to a translator. “We are committed to our position of no confrontation… mutual respect, and win-win cooperation with regard to the United States.”

Obama also thanked Xi for hosting his wife and daughters, who are touring China.

“She also played some table tennis, although I think this was not the high level ping pong diplomacy that we saw in the past,” Obama joked about his wife. [Source]

Speaking of the East China Sea and South China Sea issues, Xi said the United States should hold a fair and objective attitude and make more efforts to promote a proper solution.

For his part, Obama said his country has never changed its stand that it respects China’s sovereignty and territorial integrity on the Taiwan and Tibet issues.

Washington does not intend to undermine China’s stability or contain it, and supports the country’s reform, the U.S. president said. [Source]

At The Los Angeles Times, Kathleen Hennessey adds that Obama defended NSA spying as non-commercial and integral to national security when his Chinese counterpart raised questions about alleged U.S interference in the networks of Huawei:

Deputy National Security Advisor Ben Rhodes said Xi raised the matter, which was reported by the New York Times and Der Spiegel on Saturday. The president countered that “the United States does not engage in espionage to gain a commercial advantage,” Rhodes said, adding that Obama said the U.S. believes there’s “a clear distinction between intelligence activities that have a national security purpose and intelligence activities that have a commercial purpose. [Source]