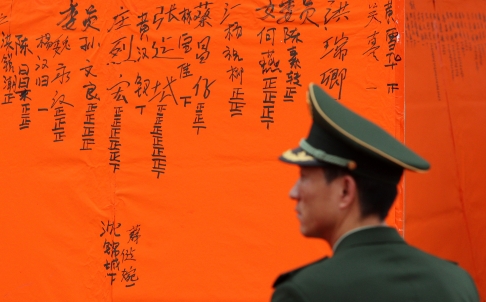 Following a gradual erosion of faith in Wukan’s democratic experiment, South China Morning Post’s Echo Hui reports that former leaders are regaining influence in the Guangdong village, while scheduled elections appear to be in doubt.

Last Friday, Xue Yubao, one of the former village bosses, was appointed by higher-level authorities in Donghai township to be the next deputy party secretary, while four of his associates will also be part of the nine-member Wukan party committee, according to deputy village chiefs Hong Ruichao and Yang Semao.

Hong and Yang were among the leaders of the grass-roots revolt in 2011.

[…] The contentious appointments of ex-deputy village chief Xue and the other cadres came ahead of a scheduled new round of elections in Wukan, after the democratically elected representatives’ tenure ends on March 6.

However, even the upcoming elections are uncertain. Lin Zuluan, the democratically elected village chief, said he was still waiting for the order for elections from Lufeng city authorities. [Source]

See more on the Wukan protests and their faltering aftermath via CDT.