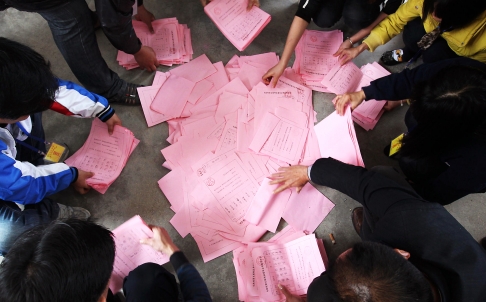 After a little more than a year in the limelight, Zhuang Liehong has given up politics. Zhuang emerged as a leader of grass-roots protests over stolen land in Wukan in Guangdong in 2011 and was elected to its village committee in a historic democratic election the following year.

But he quit the committee in October and does not intend to stand in the new poll slated for some time after winter. Like many others in this community, Zhuang has lost faith in democracy – at least the local version – amid a clash of competing interests and claims of a lack in transparency in the committee’s proceedings.

[…] Commentator Xu Zhiyuan said authorities were trying to regain control of the village. “Wukan was a miracle,” Xu said. “It happened while China was in the throes of power struggles. But now the power of the central government has stabilised.”

[…] Lin [Zuluan, the village chief] said villagers fell broadly into four groups, depending on their views: some understood and appreciated the hard work of the new village committee; some had benefitted from the illegal land grab and so supported the old village committee. Others who supported Wukan’s democracy had lost faith, while a final group wanted it to fail for personal reasons. Lin said this left the village divided with little chance of reaching a compromise. [Source]

See more on the Wukan protests and their faltering aftermath via CDT.