Word of the Week: Push-ups 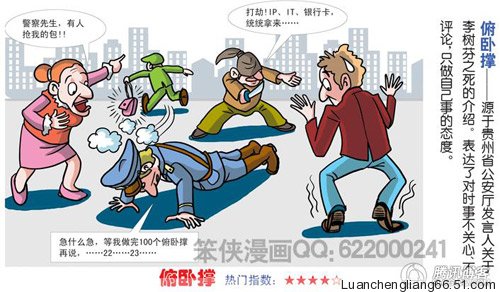 A police officer does push-ups to take care of a robbery. (Benxia 笨侠)

This exercise took on new meaning in 2008 when police claimed the son of a government official had not raped a girl, alleging instead that he had been “doing push-ups.” Backlash against this suspected cover-up resulted in the Weng’an riot.

The young man was alleged to have raped and killed a 16-year-old girl. In an attempt to quell the outcry, police claimed that the boy and girl had been arguing along the bank of a river. When they had calmed down, the boy began to do some push-ups. After he had done three, he heard her say, “I’m going,” after which she jumped into the river and drowned herself.

Few believed the police account, and a riot ensued involving tens of thousands of people. “I was doing push-ups” became a coded critique of any unpersuasive police excuse. As the phrase has spread, it has shed much of its political connotation. It no longer has just one definition: sometimes it means “minding one’s own business,” while other times it refers to a nonsensical cause of death.

Other official police accounts of individuals’ deaths have attracted similar scorn. See death from drinking boiled water and death by hide and seek.