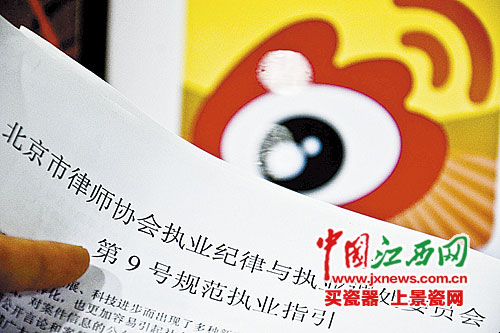 The Beijing Lawyers Association recently implemented a disciplinary provision stipulating that, prior to a court ruling, lawyers must not publish any information about cases [zh] on social or independent media outlets. Many legal professionals in the capital have spoken out strongly against both the association and the new rule. CDT has translated an article posted to Weixin by 一号专案 compiling lawyers’ disgruntled reactions:

The 8th provision in the “Guidelines” stipulates: Before a court decision takes effect, lawyers and law firms are not permitted to publicize case materials, defense statements, or to leak case information to persons unrelated to the case.

This has elicited a strong reaction from the legal sector:

Attorney Chen Youxi: The Lawyers Association is an autonomous organization. All attorneys are required to join the group, and discipline is handled in-house. The organization establishes its own rules and regulations; it is effectively an intra-professional “lawmaking” system. Regulations must be passed by the Lawyers Representative Congress. [However], regulations are currently being set by the Chairman Council, the General Council and the Professional Committee. This goes against the purpose and charter of the Lawyers Association, as regulations are now determined by a small number of powerful players, and all members of the association are expected to follow them. Such a legal system is a feudalistic one. First, the charter is broken. Second, the organization loses credibility. And third, the group will become divided.

Attorney Zhou Ze: To prohibit lawyers from publishing defense statements and other such case information, in actuality, is to ban fighting against injustice; it is to consolidate and assimilate the [power] of the lawyer.

Attorney Li Fangping: The workings of China’s judiciary have long been extremely secretive. As a result, justice frequently goes unserved. This unjust judicial system has been widely criticized by the public. The reform being undertaken by China’s judicial system strives to move in the direction of greater transparency and visibility of the administration of justice and to expand societal oversight. Lawyers are an extension of the rights of citizens. By restricting lawyers from publishing their statements and indictments, the Beijing Lawyers Association is in gross violation of the principle of maintaining an open judicial process. To the contrary, their actions effectively enable “black box justice.”

At 8am today, he will also publish a blog post titled “Special Thank You Letter to Chairman Zhang Xuebing for the Beijing Lawyers Association Providing Yang Jinzhu With the Opportunity to Make a Fortune.”

Attorney Ding Jinkun: Lawyers admittedly have a duty to maintain confidentiality. However, when others publicize harmful information about a client, how could a lawyer possibly not fight back? Again, if injustice has been done, or involves the possibility of forced confessions, everyone has the right to report it. How can lawyers be prohibited from doing so? Therefore, these provisions are improper. This is self-harming, pitiful, contemptible and deplorable.

Procedurally, these “Guidelines” affect all Beijing lawyers, and as such should be discussed and passed by the entire body before taking effect. How can committee members from a single district have the power to draft and enact regulations? The Lawyers Association used to protect the rights of its members, but now some of its members have betrayed the organization, suppressing lawyers. How can this be resolved? Alas, one can only make a mockery of it.

In an era of an open judicial process, expression of public opinion should be encouraged, not strangled. There is a point beyond which lawyers should speak at their own risk. However, a complete ban just goes way too far.

“Willow trees line the sides of the Yangtze, their sagging flowers filling those crossing the river with sorrow; an evening breeze whistles through a pavilion; you depart towards the intersection of the Xiao and Xiang rivers, and I head towards the capital of Qin.” The distance between the Lawyers Association and the lawyers is growing. History will show that justice is on the side of the lawyers.

Attorney Liu Xiaoyuan: Beijing Municipal High People’s Court official Weibo account @Jingfawangshi: After it was announced that Qin Zhihui (also known as Qin Huohuo) was guilty of slander and causing a disturbance (first degree), the case’s presiding judge Wu Xiaojun and a member of the judicial panel, Judge Li Xiao, appeared on Beijing Court Net Live, where they answered a total of 13 question from the host and online audience. The decision of the court had not yet went into effect, and yet these judges were discussing the case on this website. Yet the attorney of “Qin Huohuo,” in consideration of the Beijing Lawyers Association “Guidelines,” said that he would make the main points of the defense public only after the court decision has gone into effect. [Chinese]

The Beijing Lawyers Association’s new guideline, essentially barring lawyers from public discussion of ongoing judicial hearings, comes as the central government is engaged in a crackdown on both old and new media. For more on media control or judicial reform in China, see prior CDT coverage.