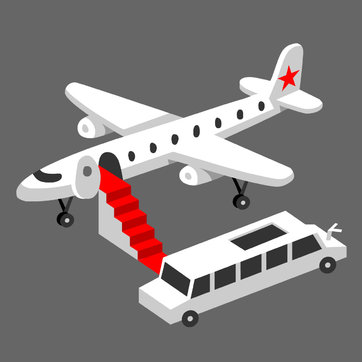 Joe Sharkey at The New York Times reports that though there isn’t a solid infrastructure to support their use, business jets in China have become a status symbol among the wealthy:

[…I]n China, where sales of business jets are increasing despite a lack of large scale air-system support and a dearth of airports to handle private flights, attitudes about private jets seem to be different [than the contemptuous ones common in the U.S.]. While forecasters had long assumed midsize and smaller jets would prevail as China’s business aviation market expanded throughout the country, that has not been the case.

[…] “In China,” Mr. Foley said, “if you’re a successful business person, you generally don’t mind flaunting that and making your compatriots aware that you’re doing well. And one way to do that is to buy the biggest and best business jet, if you have the money to buy it.”

[…] So a well-heeled tycoon might buy a $60 million luxury jet in China but find that using it is more complicated than in many countries. Still, that is where the market preferences lie, and business culture in a rapidly developing economy may explain part of that, Mr. Foley suggested. [Source]

At The Los Angeles Weekly, Claire Spiegel reports on the upwards trend of wealthy Chinese also buying up luxury homes in the United States:

Built in Pasadena in 1915, the stately Tudor mansion had been the setting for debutante teas, and even hosted a bridal garden party for Herbert Hoover’s granddaughter. In its heyday, it was owned by newspaper scion (and staunch anti-Communist) Philip Chandler, who welcomed to his home the founder of the John Birch Society in the 1960s.

Chandler, surely, would have gagged at the property’s December 2012 sale to a real estate tycoon in China. He went to his grave convinced the Communists were coming, and it would almost certainly gall him to see his own 3.5-acre estate as Exhibit A in the invasion.

Yet the Chinese have come not as the “Red Menace” he decried but as savvy entrepreneurs loaded with cash. Huang Kangjing, the son of a poor fisherman who rocketed into the ranks of China’s wealthiest elite, bought the Chandler property sight unseen for his 23-year-old son, a USC student. He paid $5.8 million cash.

Last year, he bought another mansion nearby for $3.7 million cash – interim housing while the Chandler estate receives a multimillion-dollar makeover in preparation for the Pasadena Showcase House for the Arts’ annual fundraiser. [Source]