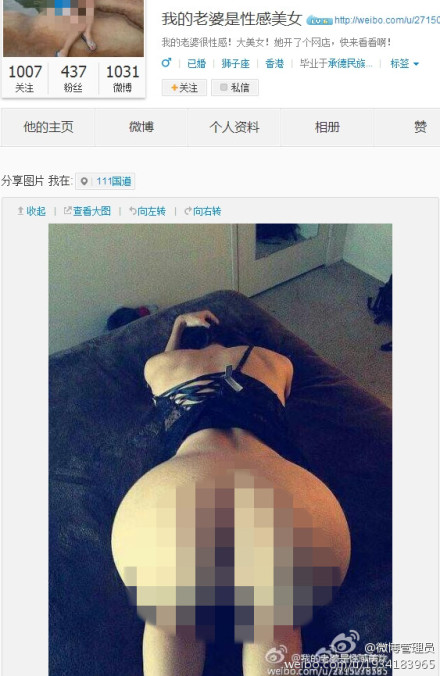 The National Office Against Pornographic and Illegal Publications, a branch of China’s main media regulator, recently announced a new crackdown on pornographic online content, a measure the Global Times notes is essential for China’s “cyber development”:

Bu Xiting, an official at the Communication University of China, sees the campaign as a sign of the government’s determination to create a healthy cyberspace.

“[It] shows that China is taking an important step toward the rule of law in the virtual world,” Bu said.

He said that as China has built up the biggest population of netizens amid decades of breakneck Internet development, forums, websites and online game ads have wielded bad influences by touting themselves with sexual hype, which is why the government needs to step in.

This latest campaign has been months in the making. On Feb. 5, the Central Propaganda Department (CPD), the party organ tasked with censorship and information dissemination, ordered an investigation of “pornographic and vulgar information” — one whose main target was actually a variety of online columns, infographics, and trending or recommended reading. Interpretation of the actual meaning of “pornographic and vulgar information,” of course, rests entirely with the CPD. […] [Source]

While pornography sweeps and anti-vulgarity operations are not uncommon in China, this most recent one comes amid an ongoing central government campaign to increase control of the Internet. Over the past year, the Xi administration has done much to rein in online public opinion by launching rules to build a “favorable online environment” and punishing violators, publicly humiliating influential social media users, and creating a legal means to punish broadly defined “rumor-mongers.”

Another post from Tea Leaf Nation notes that the Sina Weibo hashtag #扫黄打非·净网2014# (sweep out yellow, strike at rumors · clean web 2014), created to aid in the crackdown, seems to be backfiring, instead “allowing users to find (blurred) pornography more easily”:

The Chinese government’s latest effort to bring the country’s social web under control appears to be backfiring. A new phase in a government crackdown on undesirable online content announced March 28 — called “sweep out yellow, strike at rumors” (the former referring to pornography, the latter including opinion contrary to the Communist Party line) — has become a hashtag on Sina Weibo, China’s Twitter, bearing the same name. It appears to be an astroturf campaign: authorities have encouraged the hashtag, even if they did not generate it, by inviting netizens to get in on the anti-porn action through “joint monitoring and reporting.” And join they have, by labeling not-quite-pornographic material with that tag in what looks an awful lot like a bid to taunt censors. […] [Source]

The newest crackdown has also set its crosshairs on slash fiction. Offbeat China notes that this has angered many of the “rotten women” who often write and read the genre:

Slash fiction is a genre of fan fiction that focuses on the interpersonal attraction and sexual relationships between fictional characters of the same sex. In China, slash, or dan mei (耽美) in Chinese, goes beyond fan fiction, and is used exclusively to refer to male-male slash. Believe it or not, slash is more popular than one would expect in China, and sex scenes are a big part of Chinese slash stories.

[…] The majority of readers, as well as writers, of slash in China are straight young girls who identify themselves as “rotten women (腐女).” […]

[…] In their eyes, slash is but a victim of the country’s system-wise discrimination against homosexuality. As one female netizen 咖啡呆丶LM commented: “This is not cleaning the cyberspace. This is pure discrimination. I may never see a rainbow flag fly above China in my life time.” [Source]

After describing the politics behind the campaign and the contrast between China’s official anti-porn stance and the prevalence of black market retailers and sex workers, Lily Kuo also notes that some see this crackdown as a means to discriminate. From Quartz: