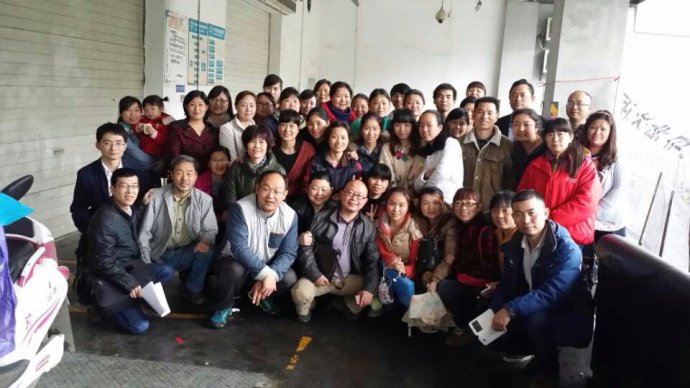 Tens of thousands of workers have been on strike at multiple factories for Yue Yuen, the world’s largest manufacturer of sports shoes, which supplies companies including Nike, Adidas, Asics, Reebok, Puma, and New Balance, as well as Crocs and Timberland. Now, Dongguan’s local government has told the company that it should reimburse workers for several years of underpaid pension contributions, taking into account overtime and other additional pay as well as basic wages. From Demetri Sevastopulo at the Financial Times:

[…] While the Dongguan government view echoes the company’s own proposal, experts said it was a rare example of a Chinese trade union actually trying to help workers.

[…] “The Dongguan trade union federation is to be commended for taking the issue seriously and looking for solutions. The company too seems to be engaging in good faith,” said [China Labour Bulletin’s Geoff] Crothall. “But at the same time, we have heard the police presence around the factory is increasing and there is more pressure on workers to accept the deal on the table. Looks like the authorities are using both carrot and stick.” [Source]

The Economist reports that while the shoe protests, which began on April 5, have been “remarkable” for their “scale and duration,” anxieties about pension benefits have been increasingly commonplace among factory workers in southern China:

[… A]s they listen to repeated broadcasts of the company’s offer through loudspeakers, strikers respond with howls of derision. They also tear up copies of a letter from the government-backed trade union which is mediating in the dispute. The missive calls on workers to go back to work and acknowledge the company’s “sincerity”. “The unions aren’t like the ones in the West,” says one worker. “Here they just represent the government.”

Such anxieties about pension provision among a workforce in Guangdong mostly made up of young migrants may sound surprising. But they are becoming increasingly common as factories try to cope with a growing shortage of young workers from the countryside by retaining employees for longer. Many of Yue Yuen’s workers are in their 30s or even 40s, and many say they have been with the company for a decade or more. Geoffrey Crothall of the Hong Kong-based China Labour Bulletin says this has been the largest strike in a non-state factory over social-security payments, but protests over such issues are becoming more common.

Workers at labour-intensive factories like Yue Yuen’s know that times are changing. Production is moving to countries with cheaper labour, such as neighbouring Vietnam. Low-skilled workers entering middle-age are getting increasingly nervous. Without decent pensions, they complain, life back in their villages will be tough. Some of the strikers wear Nike-lookalike shoes. They admit they are cheap knock-offs, made elsewhere, and guffaw at the notion that people like them could afford the real thing. [Source]

China Labour Bulletin recently noted a more general “surge” of labor actions in recent months, as well as frequently tougher responses from local authorities. This week, beside the Yue Yuen dispute, the organization reports a long-running strike for higher severance pay by 78 former Walmart employees outside a shuttered store in Changde, and protests by thousands of Shenzhen bus company workers over a range of grievances. (“I could go on for three days giving you negative examples of the company’s practices,” one protester said, “but I also need three days to think about it if you want to hear a positive one.”) See also China Labour Bulletin’s February 2014 report for an overview of developments in China’s workers’ movement from 2011-2013.