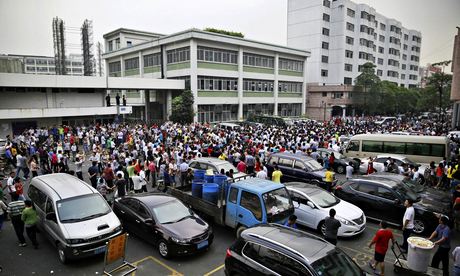 Jonathan Kaiman at The Guardian reports that the ongoing Yue Yuen Industrial (Holdings) Ltd.’s shoe factory strikes in Guangdong have spread to thousands of workers protesting “unfair pay and benefits” at another factory in neighboring Jiangxi:

Up to 30,000 employees have stopped working in the strike – China’s largest in recent memory, according to the New York-based non-governmental organisation (NGO) China Labour Watch.

“The issue that [the workers] are concerned about is very widespread,” said Geoff Crothall of the Hong Kong-based China Labour Bulletin, another NGO. “In this case, at least the company was paying something, it just wasn’t the full amount. In other cases we’ve seen, workers are getting nothing at all. [Source]

Didi Tang and Kelvin Chan at the AP report that the factory owners and workers in the Dongguan strike “appeared far from agreement”:

Tens of thousands of workers remained off the job Tuesday, according to workers and labor groups, after they rejected the company’s latest offer, which included making up back payments for social security and housing, full contributions for those benefits starting May 1 and a $37 monthly cost of living allowance.

“We’ll pay what is in the regulations, there should not be any concern on that,” Yue Yuen spokesman George Liu said.

[…] “We are not quite sure who to come to a deal with,” Liu said, adding that the dispute was having an impact on production and the company has made contingency plans to shift work to its other factories in Vietnam and Indonesia.

[…]He said workers are worried about losing their jobs but are unwilling to accept the Yue Yuen offer.

“As far as I know, none of the workers around me would like to accept the offer,” Cui said. “Some have worked there for more than 10 years, and in this case, they need to pay like 20,000 to 30,000 yuan (to make up the missed social security payments). It is too hard for the workers.” [Source]

Update: Two activists who have reportedly been advising the striking workers may have been detained, according to a report by Bloomberg News:

The two activists, Zhang Zhiru and Lin Dong, entered a factory belonging to Yue Yuen Industrial Holdings Ltd. (551) in Dongguan to help workers after a strike began April 14, China Labor Watch said on its website. Zhang’s wife Xiao Hongxia said the last time she reached her husband was midday April 22, when Zhang told her he had met with security officials.

“I called my husband at noon yesterday, asking if he would be coming home to eat,” Xiao said in an interview on April 23. “He said he was in Dongguan and already having his meal. I haven’t heard from him since.”

[…] Zhang, manager of the Shenzhen Chunfeng Labor Dispute Service Center, and Lin advised some employees in the Yue Yuen factory on how to do collective bargaining, said workers who asked not to be identified because they feared they or their family members could lose their jobs. [Source]

Reuters has more on Zhang and Lin:

Zhang had been closely following the Yue Yuen strike and was working with other activists and lawyers to try to help the workers organize to press their demands.

Lin Dong, a colleague of Zhang’s at the Shenzhen Chunfeng Labour Dispute Service Center, may also have been detained, Xiao said. Calls to the center went unanswered.

Early last week, Zhang tried to travel to Gaobu to meet workers but was detained by police briefly and sent back to Shenzhen, he told Reuters on Friday.

On Monday, however, Zhang and a lawyer involved in labor issues went to Gaobu and met several workers to discuss their options, said Wang Jiangsong, a Beijing-based labor researcher.

“That’s why this has happened,” said Wang, referring to Zhang’s possible detention. [Source]