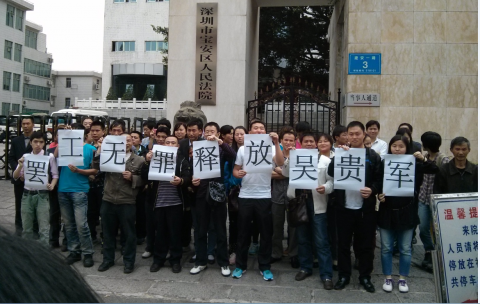 In 2009, university-educated Huang Xingguo took a cashier job at a newly opened Walmart store in Changde, Hunan Province, where he quickly rose to management and was then elected to lead the store’s union branch, an arm of the All-China Federation of Trade Unions (ACFTU). Following the Changde store’s recent and shortly-announced closure, Huang is mobilizing his store’s union branch in a case against Walmart that could challenge the ACFTU, an organization often criticized as being weak and far removed from the workers it is tasked with representing. Reuters reports in detail on Huang, the compensation demands of the 70 plus workers he is representing, the potential this case has towards forcing an ACFTU overhaul, and the “risky business” of organizing labor in China:

Worker protests are common in China, but leaders like Huang are not. Huang is chairman of the state-backed union at Walmart store No. 2024, and was democratically elected to the post, which makes him even rarer. Because Huang is a union branch leader, the case is also a challenge to the world’s largest and China’s only legal union, the 260 million-member All-China Federation of Trade Unions (ACFTU).

Over the past several years, China’s union has sat on the sidelines as workers, emboldened by a demographic shift that has led to a shrinking labor pool, have become more knowledgeable about their rights and proactive in using both collective action and the legal system to protect them. The ACFTU has typically done little to protect the rights of labourers in disputes, despite a mandate to do so, experts and workers say. Most union branch bosses in China are hand-picked by management.

[…] China’s unions are fundamentally weak, said [an anonymous] scholar with ACFTU ties. Its mandate is to protect the interests of the nation – or government – above those of the workers. “When there’s a conflict they have to protect the former,” the scholar said. “It’s the safe choice.”

In a country where the right to strike is not legally protected, labor organizing is a risky business. The government puts a premium on maintaining a stable, investment-friendly environment. […] [Source]

The risks that come with organizing labor in China were on prominent display last week in China, where the trial of Wu Guijun, an elected workers’ representative at a non-unionized furniture factory in Shenzhen, resumed on Friday. While Huang’s case against Walmart may have potential to bolster union power in China union, some worry that Wu’s trial is signaling a crackdown on China’s labor movement. From China Labour Bulletin:

Wu pleaded not guilty to the charge of “gathering a crowd and disturbing the order of public transportation,” which carries a prison term of up to three years. Wu had been detained in May 2013 after several hundred workers at Hong Kong-owned furniture maker Diweixin took to the streets in protest at their employer’s refusal to discuss compensation for a planned closure and relocation of the factory.

The hearing lasted for about five hours and seven workers testified for the defence. They pointed out that rather than inciting and organizing the demonstration as alleged by the prosecution, Wu had actually urged the workers not to take provocative actions, such as blocking traffic, during the 23 May protest.

Wu’s lawyer, Pang Kun said: “During the labour dispute, which the prosecutor insists led up to the 23 May incident, Wu was elected as a workers’ representative. By facilitating talks with management and helping co-workers get their due compensation, Wu was performing his duty as a representative and exercising his lawful rights as a worker.”

[…] With the help from academics, labour rights groups and lawyers, Wu’s son has started an online petitioncalling for his father’s release, which has so far been re-tweeted more than 12,000 times. [Source]

Union Solidarity International has more on Wu Guijun’s trial and the worker strike that brought him to court, noting government anxiety about worker mobilization and the country’s lack of a mechanism for effective collective bargaining:

[…] The mindset of Chinese government in handling labour disputes is still in the primitive stage of maintaining stability. Industrial actions are increasingly deemed as a huge threat to social stability as they have become a daily occurrence and may expand outside the factory in the forms of street marches, road blockage and sit-ins. Strikes as an extralegal matter are frequently quelled by armed force, and workers activists face the danger of being fired, administrative detention, or judiciary prosecution. Yet, so far China still does not have an effective collective bargaining mechanism to address the increasing number of labour conflicts between workers and employers. […] [Source]

Thousands of workers took to the streets on Saturday at a shoe making factory in Dongguan under the Taiwan-based Pou Chen Group when workers discovered that the factory has cheated them by using invalid contracts and signing up long-term workers with temporary staff social insurance schemes.

Yuyuan shoe factory in Gaobu Town in Dongguan is the biggest shoe making factory for more than 30 world famous sportswear brands such as Nike, Adidas, Reebok and Salomon. It has been operating in Dongguan since 1998 and currently has more than 60,000 workers, China Newsreported on April 5. It was also the factory where basketball legend Michael Jordan visited in 2004 on a China tour. […]  [Source]

For more on Huang Xingguo’s opposition to the closure of the Changde Walmart store or on Wu Guijun’s initial trial in February, see coverage from the Financial Times.