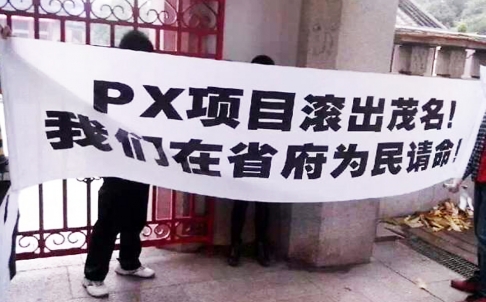 Protests that began Sunday against a proposed paraxylene (PX) plant in Maoming, Guangdong Province, swelled in size as they entered their fifth day on Thursday, according to a report from Radio Free Asia:

Thousands of protesters converged on government buildings in the southern Chinese province of Guangdong as protests against a planned petrochemical plant entered a fifth day on Thursday, residents said.

Protesters gathered outside the offices of the Maoming municipal government as the authorities held a news conference saying they had detained 18 people during the clashes.

“I am here at the scene right now, and there are probably upwards of 20,000 people here [outside the government buildings in Maoming],” a protester and Maoming resident surnamed Chen told RFA’s Mandarin Service. [Source]

On Tuesday, a protest against the proposed plant was staged by Maoming residents living in the provincial capital of Guangzhou, eight of whom were detained by police according to a report from the Financial Times. On Thursday, another demonstration was held in Shenzhen. Central government authorities have ordered websites to delete any further calls for protest in Guangdong province.

Rumors circulated on social media that a heavy police crackdown on early Maoming protesters left at least four dead and several more injured. China’s state media denied these rumors, instead focusing coverage on the benefits of domestic PX production and public misconceptions about the environmental danger of PX plants. On Thursday, officials in Maoming admitted that there were “accidental” injuries, but continued to deny any deaths. From Reuters:

Officials in a southern Chinese city acknowledged on Thursday that 15 people were hurt “accidentally” at a mass protest against a chemical plant, days after police made no mention of injuries in a case that has incensed many Chinese.

But the deputy police chief of Maoming also denounced as “pure rubbish” news and online accounts of the upheaval last Sunday that said several people had died. Reports of the unrest had sparked demonstrations in nearby towns by sympathizers.

“In the course of cleaning up the scene, because the gathering of people was complicated…and at its peak with 1,000 people, on-duty police officers may have accidentally injured some of the bystanders,” deputy chief of public security Zhou Peizhou said, according to a report by the city’s news site.

Protesters told Reuters they had seen several people killed in the protest and dozens injured. [Source]

Deputy chief Zhou also noted that 18 of 44 alleged criminals had been detained, most under charges of gathering crowds to disrupt public order and instigating quarrels.

While municipal officials in Maoming have promised to allow public input and to scrap the proposed plant if a majority of residents oppose it, the South China Morning Post reports that locals are skeptical:

“It’s the fifth day since the protest began,” one resident said. “The mayor of Maoming has yet to respond to our demands.”

[…] With police posted at government buildings, tensions in Maoming eased by Wednesday. Officials kept a lid on online dissent, with photos and video of police violence deleted from social media sites, according to residents.

Maoming officials and police blamed the violence on a small group of “outlaws”. Residents rejected the characterisations, which some saw as an excuse for cracking down on dissent.

“Maoming’s a small city – who gave these officials such power over us, to muffle our complaints, beat us with electric batons, fire tear gas at us?” one resident asked. [Source]

In recent years, there has been a rise in protests against similar PX chemical plants throughout China. Protesters in Maoming are voicing environmental concerns just after Premier Li Keqiang declared “war against pollution” at the National People’s Congress last month.

See also the BBC’s attempt to piece together the violence that escalated last Sunday in Maoming.