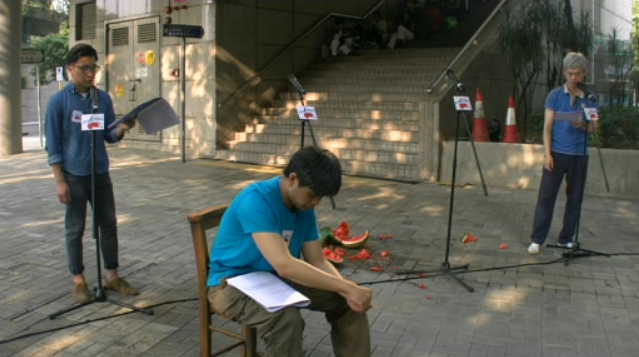 […] The reporter, keen to please his boss, censored himself further. Finally, his work was reduced to just five, innocuous words.

“My mother was a woman.”

The absurd scene comes from a new play written jointly by 11 playwrights in Hong Kong that was performed in the semi-autonomous region of China for the first time on Sunday, to protest against what they see as a growing threat to the territory’s cherished freedom of expression. The play is based the true story of Kevin Lau Chun-to, the former chief editor of a newspaper in Hong Kong that has frequently been critical of the Chinese government. Lau was sacked as editor of Ming Pao newspaper in January. On Feb. 26, three days after a large demonstration in Hong Kong in support of press freedom, Lau was attacked by two men and stabbed six times in the back and legs.

The play opens with a recording of Lau, made just a few days after the attack. “Violent attacks make us scared. But if we are scared, we will lose our freedom. So I hope our news professionals do not fear. We should believe that justice will be done,” he said. “Only when we use the pen in our hand to write the truth, can we safeguard freedom.”

Each of the playwrights wrote a different scene, in support of a new group called Freeatre in Action, a loosely organized group formed in February to raise awareness about freedom of expression. […] [Source]

While Lau was serving as Ming Pao’s chief editor, the newspaper took part in the ICIJ project that revealed the offshore assets of many Chinese elites. Kevin Lau was removed from his post in January, leading many of his colleagues to protest. Just before Lau was attacked, thousands gathered in Hong Kong to voice concerns about Beijing leveraging economic clout to influence Hong Kong’s protected press freedoms. Further press freedom demonstrations occurred after the stabbing. In a recent report from the South China Morning Post, veteran Chinese journalist Ching Cheong, who was jailed for three years under charges of spying, said that press freedom in Hong Kong is now at an all time low:

[…] Ching said physical assaults were only one kind of threat to press freedom; censorship had also to be guarded against.

He said there had been many signs that some forces were trying to silence the press, citing the sacking of Commercial Radio host Li Wei-ling, and Malaysian editor Chong Tien Siong’s appointment as principal executive editor of Ming Pao.

“If you consider the entire atmosphere in the industry, the source of that is clear. The source of that, to me, comes directly from across the border,” Ching said. [Source]