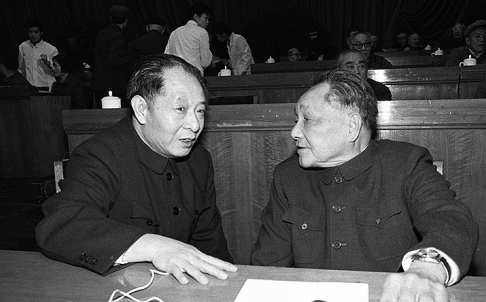 On April 15, 1989, 25 years ago today, former CCP General Secretary Hu Yaobang died days after suffering a heart attack at his final meeting in Zhongnanhai. At the New York Times’ Sinosphere blog, Chris Buckley explains how the reform-minded liberal’s death catalyzed the turbulent spring that would follow, and how his legacy remains a potent symbol in China today:

Rarely has the timing of an ousted leader’s death been so consequential. In 1989, Hu Yaobang, a former general secretary of the Chinese Communist Party, was attending a meeting of the Politburo when he became pale and shaky, asked to be excused and crumpled with a heart attack. Twenty-five years ago, on April 15, he died after a week in the hospital, an event that unleashed a cascade of demonstrations centered on Tiananmen Square, which culminated in the armed crackdown of June 3-4.

[…] In life, and even more so in death, Mr. Hu was seen by many as embodying more lenient tendencies in the Communist Party that were open to some political liberalization. Deng Xiaoping and other party elders had dismissed Mr. Hu as general secretary in January 1987, after accusing him of being too soft on student protests and dissenting intellectuals. In 1989, grieving for Mr. Hu became a vehicle for voicing public discontent about corruption and political fetters on a rapidly changing society.

“In fact, this was the spark that lit the fire, but we can’t know how different things would have turned out without it,” Zhou Duo, a scholar in Beijing who took part in a hunger strike on Tiananmen Square in the days before June 4, said in a telephone interview. On that day, he and others negotiated with troops for the remaining students to leave the square without a blood bath. […] [Source]

Hu’s name was forbidden from media discussion until 2005, when his protégé (and then PRC President and CCP General Secretary) Hu Jintao led his rehabilitation. While mentions of Hu Yaobang are now officially allowed, they aren’t common, as discussion and commemoration of June 4th, 1989 and the Tiananmen protests so associated with the late liberal leader remain strictly prohibited. While in Hunan for a rare public appearance last week, the retired Hu Jintao made a stop at the deceased Hu’s former residence, a visit that the central government has ordered the media silent on. A report from the Hong Kong-based South China Morning Post has more on Hu Yaobang’s political career, its resounding political significance, and on Hu Jintao’s decision to pay public respect to his mentor from the safety of retirement:

The low-key visit to Hu Yaobang’s old residence last week by former president Hu Jintao is perhaps most telling about the Communist Party’s attitude towards its former leader. Even after an official taboo over commemorating Hu was lifted in 2005, Party officials still remain cautious about the reformist whose death in 1989 sparked a democracy movement that changed China forever.

Xigen Li, a professor with City University of Hong Kong’s department of media and communication, said that Hu Jintao only visited his former mentor’s residence in Hunan province after his retirement as he was careful in avoiding controversy.

“His visit to Hu Yaobang’s residence can be seen as just being personal and thus avoid any political controversy,” Li said. […] [Source]

In a separate report, the SCMP talks to some of the many “pilgrims” who have gone far out of their way to offer their respects to Mr. Hu, their memories of his leadership and of the movement his death inspired:

Each year at Ching Ming, Ni Xinhua visits Hu’s tomb in Gongqingcheng. The city’s name translates as Youth League City, and is a place that Hu helped establish in 1955.

Ni says he met Hu there 59 years ago, in a shed nestled amid wilderness. Ni was one of the 20 young men and women from Shanghai who had answered a call by Hu, then general secretary of China’s Youth League, to go where they were needed.

[…] Fang travelled from Ningbo, Zhejiang, to place a bouquet at Hu’s tomb. Fang had been branded an “anti-revolutionary” while working in a coal mine in Jiangxi during the Cultural Revolution.

“He was a clean official and he stood high in my heart,” Fang said. [Source]

The SCMP also talked to Hu Yaobang’s son Hu Dehua, who expressed regrets that China has failed to make significant progress on the path towards political reform envisioned by his father:

“Press freedom should have been the first step in political reform, but there is still no law on it … I guess it will never come out,” Hu Dehua said.

“When you have no law to protect these rights, everything is in the hands of the officials.

“Although we have a constitution which guarantees freedoms in speech and assembly… in fact, there are hardly any freedoms. We have no right to supervise [the government].”

He added: “Today, corruption among officials is impossible to rein in and ethnic tension is intense. There was a window for reform then [in the 1980s] but it was missed and I don’t know when the next one will come.”

[…] Hu Dehua’s comments carry weight because of the respect people still hold for his father – one of the most important leaders responsible for steering China out of the chaos of the Cultural Revolution and into the era of “reform and opening up”. [Source]

On this 25h anniversary of Hu Yaobang’s death and in the lead up to that of June 4th, 1989, also read Malcolm Moore’s coverage of “the event that no one dares remember” at The Telegraph, or listen to Louisa Lim’s NPR report on a less-covered manifestation of the movement inspired by Hu’s death in Chengdu.