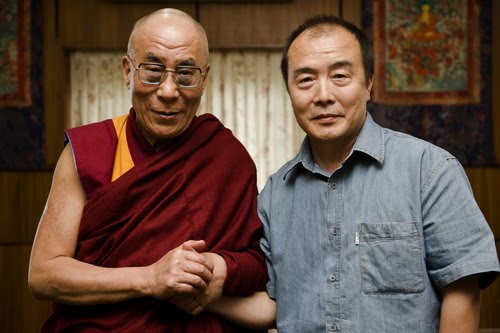 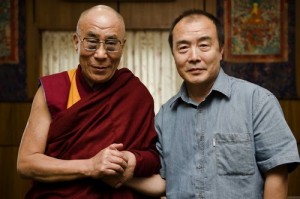 Wang Lixiong is one half of a writer-activist couple in Beijing. His wife, Tsering Woeser, is Tibetan. Wang, who is Chinese, has studied and written extensively about Tibet and Xinjiang.

Wang is in the midst of publishing his latest novel, Reincarnation (转世), chapter-by-chapter on his blog. He has plans to release an eBook and an iPhone app after he has released the last chapter. Reincarnation starts with the same setting and some of the same characters from his 1991 novel Yellow Peril (黄祸), published overseas and translated under the title China Tidal Wave in 2008. That earlier novel imagines an imploding China that pulls the world into nuclear war. Reincarnation imagines an alternate evolution of the story, with characters manipulating public opinion, mostly online, in attempts to either overthrow the government or prop up the mafia-like political system.

In this excerpt from Reincarnation, Shen Di, the head of a security company with connections to all levels of government, is trying to catch the thief who paid a commanding officer half the going price for his Tibetan mastiff. Shen Di is thinking through an online campaign to retrieve the dog and punish the thief. The passage is a primer on the Chinese Internet: how stories go viral, how they die, and how the government steers public opinion.

Now the most important thing was to keep an eye on the Internet. This involved so many people, it would be impossible to keep completely quiet about it. The key was not to let it “ignite.” By “ignite” he meant a chain reaction, like waves pushing waves, spreading explosively online; it’s the Matthew effect, covering the Internet instantly, resonating with millions of users. As soon as the fuse is lit, all the force of the nation can barely keep it under control, and usually one must yield. And as long as it doesn’t explode, one just needs the next big story to drown it in the sea of information, or to simply let it be, silent and ignored. This is how the Internet works. The key to controlling the Internet is to keep the bombs from going off.

Filtering sensitive keywords is a basic way to cut off circulation. China’s Great Firewall is the world’s finest. While over-zealous filtering can impede the flow of all information, with certain issues you don’t have to think about it too much. Efficiency is secondary. The main thing is to make users feel things “don’t work right” for a while, to block the spread of the story. This is how the Internet is, changing in a flash. One little slip, and that hot topic won’t be so hot anymore. Obstruct each node a little, and the cumulative effect will defuse the bomb. This is a well-worn method.

But these days you can’t block every channel. If there’s an unverified rumor, that rumor has news value. Blocking it will only urge reporters to dig it up. For the media, the key to the news is in its newness. If it isn’t new, it gets tossed to the side. So the better way to keep the media from hyping something up is not to censor it, but to announce it oneself, turning it into old news. The media, in its addiction to the new, will find the story dull and put down its shovels. They may even republish one’s own statement. By rushing to tell the story first, one will have control over how it is analyzed and how much it dominates discussion.

This is exactly how a PR news team takes care of things. The final press release avoids mentioning the rights demanded by workers occupying the factory, the negotiation reached with the mafiosos on their hostile takeover of the space, the destruction of national property, the way that a crowd assembled and turned violent when the government came to tear down the illegal building, and how they killed armed police officers and injured soldiers, and then how this lead to arrests, and how there will be trials in accordance with the law. When Shen Di reviewed news stories, he would take the number of arrests reported, which was already half of the real figure, and halve it again. He would immediately send the article to Beijing, where it had already been arranged to serve as Xinhua News Agency wire copy. In a few hours, people would wake up and hear the news from all of the official outlets, and they wouldn’t pay much attention to it, because the story wouldn’t be positioned to draw attention, and it would be brief.

Another tactic he would use is less standard, a low move, but effective–deliberately starting a rumor online. It would be much like what had actually happened. He would keep the guns and the death, but would have it happen in another province. It would bubble along online, and then some local netizens would deny the story, and the rumor would implode. Then the police would arrest some rough-looking rumormonger and have him confess his crime on TV. This works like a vaccination: even if the story spreads online again, since it sounds practically the same as what came before, people will think it is the same old rumor, or else yet another rumor trying to get off the ground. And then Shen Di would muster the Water Army to mix things up. The Internet is a place that does not distinguish between truth and fiction, yet at the same time clearly separates right from wrong. As long as information is muddied beyond distinction, people with neither the will nor the ability to check a story will even give their children a rinse in that water.

As soon as something involves the Internet, you have to manage it on a national scale. This was a limitation of the local government, and it was Shen Di’s advantage. Another advantage for Shen Di was his speed–the slightest tardiness determines whether something blows up or not. Timing is the easiest thing for the bureaucracy to bungle. Shen Di relied on family alliances to get straight to the highest authority; he didn’t need to get permission at every step up the ladder like the system did. The people at the top need only say the word, and the entire country will move to “get big things done by concentrating our power.” These past few years, the authorities had substantially improved their ability to control the Internet, and they had towering confidence. The Internet didn’t have the subversive power that was so feared when it first arrived. Instead, it had become a tool to serve the powers that be. The authorities have totally overwhelmed the people with their Internet capabilities. At the same time, they have created a fantasy wonderland, where they numb people with entertainment and give virtual release to their frustrations. If something comes up, the government can guide public opinion or confuse the facts. Either way, it settles the issue. [Chinese]

Read more from and about Wang Lixiong via CDT.