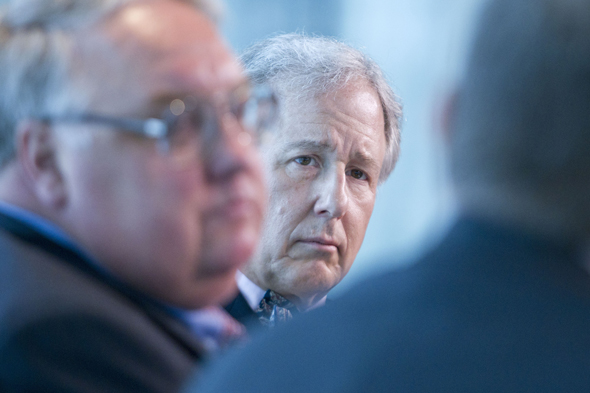 In the Columbia Journalism Review, former New York Times’ Shanghai bureau chief Howard French retraces the events leading up a decision by Bloomberg editors to cancel publication of an investigative report on corruption involving high Chinese officials, and the dismissal of Michael Forsythe, a lead reporter on the story. As French recounts, Bloomberg, which was primarily known as a financial news outlet, had broken new ground by investigating the wealth of then incoming President Xi Jinping and his family. The decision to pull a later story on corruption, and comments by business manager Peter T. Grauer expressing regret for the team’s investigative work, have, in French’s words, spun Bloomberg “into crisis from which it has not yet emerged”:

A step away from Bloomberg’s troubles, something far larger is at stake: the ongoing struggle between authoritarian China, an incipient superpower, and the international media over control of news in a country that is not only the world’s most populous but will soon be its largest economy. Lately, China has been rocked by yet another instance of high-level political intrigue, centering on the former head of internal security, Zhou Yongkang, until recently a member of the Politburo’s powerful Standing Committee and now under house arrest. The anticipated prosecution of Zhou will test China’s ability to control the narrative about official coruption in the country, particularly if the international media continues to take an investigative approach to coverage.

To be sure, Bloomberg has more to lose in China than other media companies. The market is crucial to Bloomberg’s core business of leasing $2,000-a-month data terminals to financial services firms, a more lucrative business than traditional media models of selling ads and subscriptions. What is more, at virtually the same time that crisis was erupting at Bloomberg, company executives were discussing the creation of a new, Chinese-language Bloomberg.com website, according to email correspondence shared with me by people privy to this effort. As Grauer said during his moment of public candor in Hong Kong: “We have to be there.”

But, all news organizations have a big financial stake in China.

What may be most critically at issue is the fate of any independent muckraking reporting from China, a recent innovation born of intense competition between rival American news organizations just two years ago.

To understand why this is so, one must first unravel the complicated story of how Bloomberg put its investigative effort in China together in the first place, and how it ultimately fell apart. [Source]

Read the original Bloomberg report on Xi Jinping’s family’s wealth, as well as more about the controversy surrounding Bloomberg reporting in China, via CDT. See also reporting on the wealth of the family of disgraced former security chief Zhou Yongkang, which Michael Forsythe wrote with colleagues Jonathan Ansfield and Chris Buckley for the New York Times following his dismissal from Bloomberg.