Braving the Forbidden City in a Wheelchair 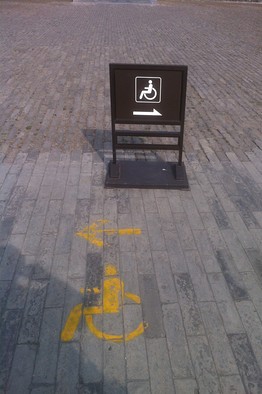 “This is actually pretty impressive. It’s better than a lot of tourist sites I’ve been to,” she said, looking out over the tourist crowds from the platform in front of the palace’s Hall of Union.

Equally striking, according to Ms. Heumann, who grew up struggling to navigate 1950s Brooklyn: how few people were making use of the pathway.

[…] Maggie Sun, a Beijing-based disability rights advocate with the NGO Handicap International who accompanied Ms. Heumann on the tour, said a culture of protectiveness hampered the ability of disabled people in China to be more independent.

[…] During the same visit to Beijing, Ms. Heumann also met with Chinese officials to lobby for changes to assist China’s disabled population. Perhaps the most important, she says, is helping cultivate a culture of independence for them through more inclusive education, the eradication of discriminatory policies and creation of more community-based services. [Source]

Blind legal activist Chen Guangcheng, who was forced to teach himself the law because of exclusion from formal education, has described disability as “a mirror to society”. Following a major report on discrimination against the disabled in Chinese education last year, Human Rights Watch hailed a breakthrough in April with the announcement that the national university entrance exams would be made accessible to blind students. Still, as James Palmer wrote at Aeon in February, there is often a wide gap between official policy on disability and practical reality.