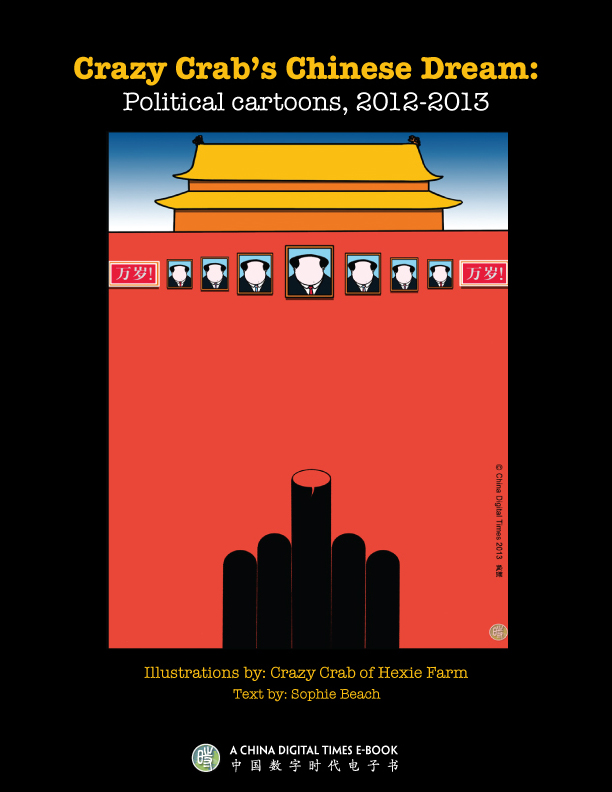 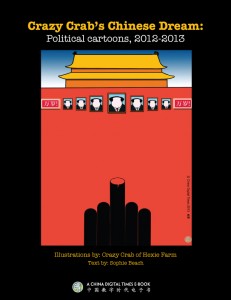 Hexie Farm (蟹农场) is the name of a series of political cartoons created by an anonymous Chinese cartoonist under the pen name Crazy Crab (疯蟹). His drawings quickly gained a large following online for their unique blend of satire, wit, and razor-sharp commentary on current events in China and beyond. Crazy Crab uses visual references to traditional fairy tales, George Orwell, and political propaganda slogans to critique China’s leadership.

“I hope to make change, to draw something that we have never thought about, or dared to draw, before,” Crazy Crab tells China Digital Times. “I also want to use cartoons to…spread some question marks in the censorship system.”

All cartoons in the eBook were drawn between February 2012 and September 2013, when Crazy Crab was a contributing cartoonist for China Digital Times. His drawings covered a busy period in Chinese political history, from the downfall of former Chongqing Party Chief Bo Xilai to the transition of power from Hu Jintao to Xi Jinping.

Proceeds from the sale of this eBook will be shared with Crazy Crab and China Digital Times.

In collaboration with Crazy Crab, CDT has also launched a line of t-shirts and other merchandise featuring Hexie Farm artwork. To celebrate the launch of the eBook, we are making a Special Offer: Receive a free copy of the eBook with the purchase of any CDT T-shirt. Just email your receipt to [email protected] and let us know if you prefer the ePub (Kindle, iPad) or PDF version.