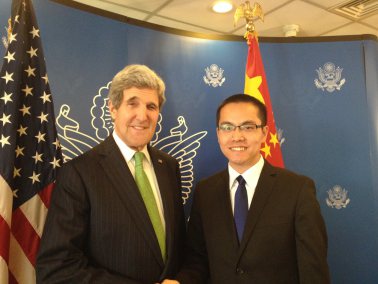 At China Change, 26-year-old blogger and former editor at qq.com  Zhang Jialong explains why he was dismissed from Tencent this week in the aftermath of a meeting he participated in earlier this year with U.S. Secretary of State John Kerry:

On May 20th, I was notified by the department head at Tencent that I was being suspended, citing radical expressions I made in my meeting with the U.S. Secretary of State John Kerry earlier this year and the propaganda directives I publicized online. I was told that I would receive a final decision after Tencent coordinated with the propaganda authorities.

On May 23rd, Tencent’s HR department notified me of the termination of my labor contract for “leaking business secrets and other confidential and sensitive information.” On the same day when I went back to collect my personal belongings, I found that my desktop had already been removed without my knowledge. Nor did anyone give me a reasonable explanation for what might have been done to my computer during my suspension from the 20th to the 23rd.

[…] Towards the end of the 40-minute meeting, when the spokeswoman said we could ask two more questions, I raised my hand. I said I was very concerned about Chinese prisoners of conscience, especially human rights activist Xu Zhiyong and the author and activist Liu Xiaobo. Xu Zhiyong was sentenced to four years in prison in January, 2014, and Liu Xiaobo was serving a prison term for “inciting subversion of state power” and he was awarded the Nobel Peace Prize in 2010.

[…] Meanwhile, I became a sensitive word on Tencent Weibo. Though I could still log in my Weibo account and post, but a search for my name would yield “search result cannot be displayed according to relevant laws, regulations and policies.” [Source]

Zhang also explains how and why he decided to leak propaganda directives, along with others in the media and Internet industry: “By publicizing orders from the ‘Ministry of Truth’ online, I want to tear open the iron curtain and reveal to the world how censorship of press and expression is carried out in China. Of course this irks the authorities and is regarded as an open challenge to their power.” Many such directives have been collected and translated by CDT for our series “Directives from the Ministry of Truth.”