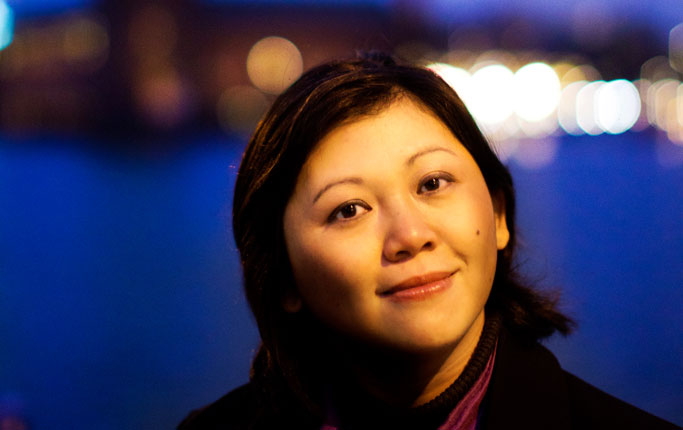 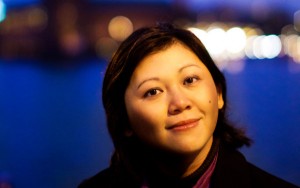 Yiyun Li: “Writing fiction is like doing detective work; you have to take in every little detail.”

Yiyun Li came to the US from Beijing in 1996 to do a PhD in immunology at the University of Iowa, but found herself drawn inexorably to literature, reading short stories while working in the lab. She switched gears, studying at Iowa’s prestigious Writers Workshop. Writing in English, Li explores the inner lives of characters against the backdrop of dramatic political and social changes.

Li is the author of two short story collections, A Thousand Years of Good Prayers and Gold Boy, Emerald Girl. Her first novel, The Vagrants, won the gold medal in the California Book Award for fiction. In her second novel, Kinder Than Solitude, four young people drawn together, then pushed apart from each other and from normal life by a mysterious poisoning, in the summer of 1989. Their Beijing is tense in the aftermath of the crackdown on protesters, but the city’s secret joys have not yet been destroyed by overzealous development. The book begins two decades after that fateful summer, when Shaoai finally dies after surviving for two decades with the severe physical and mental impairments wrought by her poisoning. Boyang has stayed in Beijing, while Ruyu and his childhood friend Moran left long ago for the US, and have not since returned.

I recently interviewed Li about her latest work.

China Digital Times: In Kinder Than Solitude, Beijing is almost a character itself. It loses what innocence it had in the summer of 1989, then loses its spirit to commercialization in the ensuing decades. One character, Boyang, reflects on the “masquerade party” that Houhai has become, a playground for the rich and foreigners, not at all the quiet, even mundane place he cherished as a child. Could you talk about the role Beijing plays in this novel as a shifting setting?

Yiyun Li: Indeed, Beijing is an important character in the novel. When I was working on it, I wrote to a friend and said that part of the novel was my love letter to Beijing—though not Beijing in its present incarnation. The changes—good ones and bad ones—that the city has experienced in the past two decades are not much different from those of the characters: in place of lost dreams there are new dreams, though more realistic. The idealism and innocence are replaced by a dependence on the busyness of a surface life to avoid the scars from the past.

CDT: The mystery driving Kinder Than Solitude seems to be inspired by the poisoning case of Zhu Ling, if not based on it. (The character Shaoai is administered the same antidote as Zhu Ling was, Prussian blue.) How did you formulate the plot, and what role did the Zhu Ling case play in your process?

YL: Zhu Ling’s case feels as though it is an anchor for my generation—a group decision of never forgetting her and her case, and never stopping pursuing those responsible for her poisoning. I would say the novel is inspired by the case because I began to research on why and how people would poison other people. The psychological violence (and physical violence) committed in such a passive-aggressive manner fascinated me. And the evasiveness of a poisoning case—any poisoning—is a good start for a novel, as there is a mystery in the center, and around it are all secrets for a novel to uncover.

CDT: Your characters might be able to heal from their trauma if they would only confront their pasts. Instead of speaking their minds to loved ones, or even visiting a therapist, they cut ties of intimacy. Towards the end of the novel, a young woman whom Boyang has been pursuing confesses a dark secret to him. Do your protagonists feel that they must punish themselves for their past mistakes? Why are they so afraid to reach out for help? How much of their behavior was learned at a particular moment in China?

YL: Confronting the past or reaching out for help—these approaches, which I would call therapeutic simplification of life’s messiness, are less of interest to me as a novelist. I am more interested in how characters make decisions and live with the outcomes of those decisions. I don’t think my characters are alone in living with their secrets. In fact, many people do, and it is for that reason literature is worth reading (and writing). I don’t feel that my characters are punishing themselves—punishment would mean that they have a certainty about their wrongdoings, and that certainty is one thing they’ve been deprived of. Nor do I feel that they have more fear of the past than others caught in their situations. However, they have made decisions about their lives that are unwise or perhaps even inexplicable to others and to themselves. Another set of Boyang, Ruyu, and Moran might have made a different life, but that is another book, not mine. I am unwilling to make a general statement about how much my characters reflect a particular moment in history. 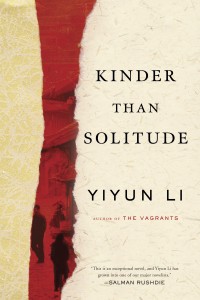 CDT: Solitude and isolation are major themes in your novel. How universal is this sense of social isolation which the protagonists face? Would you say that their solitude is particular to them, or indicative of the conditions of modern life in China and beyond?

YL: Toward the end of the novel, Ruyu says, “I have not seen a single person who’s not struggling.” I would say that’s the same about solitude and isolation. These are human conditions that are not limited to one country or one particular time in history. What is interesting to me is how solitude and isolation are dealt with through different social norms. For instance, a Jane Austen protagonist would ride or walk alone to reflect her loneliness and isolation, while someone experiencing the same sense of loneliness in China in 1960s might not have the luxury to even excusing himself from participating the public life for a moment.

CDT: When you spoke at the Asia Society in February, you said something to the effect that you “back your characters into a corner” in order to see how they will behave in extreme circumstances. Could you talk more about how you get to know your characters, and how you corner them? Are they fully formed before you start to write, or do you get to know them by pushing their boundaries?

YL: I believe characters are like people we meet in life: they don’t tell us about themselves truthfully, and what they do tell us are oftentimes lies; they resent being seen through easily, and prefer to be seen as a version they feel comfortable with. None of the characters is truly “formed” before I start to write; I write to find out who they are. Writing fiction is like doing detective work; you have to take in every little detail. For instance, Moran as a grownup is articulate about her solitude, and she wants others, and most importantly, herself, to believe that solitude is the best for her, and she has found peace in her solitude. That is very eloquent of her, but I want to see how her encounters with people, even the least important ones—an old woman walking a dog, or a little girl banging on the piano—make her aware of the wall she put up between herself and others, and let us see her conflicted feeling in that isolation.

CDT: Like Ha Jin, you write in English instead of your native language, Chinese. What challenges does writing in English present to you? What opportunities?

YL: I don’t have the intimacy to English as a native speaker has, and I will never have that intimacy. That could be a challenge, and perhaps the only challenge for me. On the other hand, I write slowly because I want to make sure every word means what I want it to mean. This may not be the case necessarily for native speakers.

CDT: Would you consider writing in Chinese? Why or why not?

YL: No, I don’t think I’ll write in Chinese. I have never done so, and don’t imagine that I could [write] fiction in it.

CDT: Do you consider yourself an American writer? A Chinese writer? Both? Neither? How does the lens of the national boundary limit how a reader approaches a novel?

YL: I would like to say a writer. I am aware, as you point out, where the readers come make a difference on how they approach a novel, and sometimes their background become a limit of how they would like to see me: for instance, I have Chinese readers saying that I can’t stop writing about the politics of recent Chinese history; I also have western audiences commenting that I am not political enough. I find these arguments both funny and irrelevant. My one and only goal is to be loyal and responsible to my characters, and I don’t take other people’s agendas into consideration when I write fiction.

CDT: There is a lot of talk among both “China-watchers” and Chinese people themselves about the materialism of contemporary Chinese society, and a corresponding sense that people lack a moral or spiritual underpinning. Is China really any worse in this respect than other places? In which ways do the US and China share the same social problems?

YL: I’m not an expert on this, but I do wonder if today’s China is comparable to Theodore Dreiser’s America, or America of the Gilded Age. China has only begun to adopt capitalism in the past twenty years, so the obsession with materialism and the moral lacking may be understandable if we look at America or Britain at a similar moment in history. Yet still it’s shocking, isn’t it, to see how materialism takes over a country like this?

CDT: What advice do you have for our readers when it comes to looking at social change in China? What pitfalls are we falling into? What are we neglecting?

YL: I am far from an expert on this one. I would say like any country, China is complex, and like any people, Chinese people are complex, too. So I would be cautious of making any conclusion or judgment too quickly.