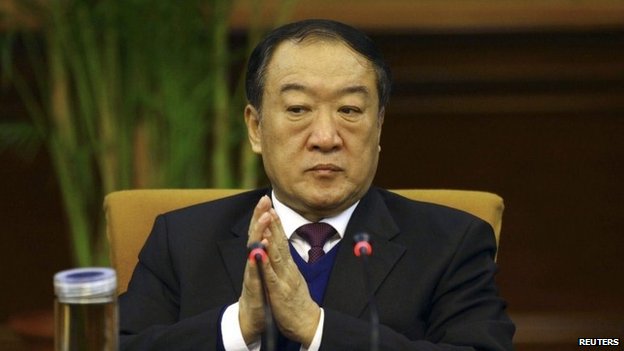 After a recently announced graft probe into Party official Su Rong, Xinhua reports that the vice-chairman of the Chinese People’s Consultative Conference has been removed from his post. Su, who had formerly held high-ranking Party posts in Jiangxi and Gansu provinces, becomes the highest-level “tiger” yet to be netted in the Xi administration’s ongoing crackdown on Party corruption.

Su Rong has been removed from his post as vice chairman of the Chinese People’s Political Consultative Conference (CPPCC) National Committee, according to a decision made at a CPPCC meeting Wednesday.

Participants at a conference of the Standing Committee of the 12th CPPCC also agreed to strip Su’s membership to the CPPCC.

Su is being probed for suspected disciplinary violations, the discipline watchdog of the Communist Party of China (CPC) said in a statement on June 14. [Source]

In early 2013, Xi Jinping indicated the scope of his graft cleanup by warning that corruption would be tolerated by neither “tigers” nor “flies”—officials from all levels of bureaucracy would be held responsible for their conduct. Last week, after the announcement of a probe into a local Shanxi official with family ties to the central government, Xinhua commented “not even having an ally high up in Beijing” could deflect the watchful eye of the Central Commission for Discipline Inspection (the Xinhua commentary was quickly deleted following a censorship directive). In an editorial published today, Caixin’s Hu Shuli outlines the importance of an aggressive and far-reaching campaign to effectively answer China’s corruption problem:

No organization or individual should be untouchable because corruption is pervasive. As these and other cases show, the malaise has reached into every nook and cranny of China’s society and economy.

As long as the oversight of power remains lax, corruption will flourish, whatever the industry or project. By coming down hard on perpetrators, the government is building up public confidence in its law enforcement. It also sends a warning to other corrupt officials to clean up their act.

[…T]he fight against corruption cannot be half-hearted. The government must demonstrate its zero tolerance for corruption through its actions. This is the best way to burnish the leadership’s image.

China’s economic growth is slowing. No doubt businesses in the fine dining, hotel and entertainment industries are hurting because of the corruption crackdown. But should they have flourished to such a degree in the first place? Many of these companies thrive on dirty money. One could argue that the economy would be better off without them.

[…] It is vital the government builds a just and fair society to ensure China meets its development and reform goals. And cracking down on the corrupt, wherever they may be found, must be part of this effort. [Source]

Two of the bodies probed were the official Xinhua news agency and the ruling Communist Party’s People’s Daily newspaper, both of which have issued stern warnings against extravagance and waste on an almost daily basis.

The Global Times, an influential and widely-read tabloid published by the People’s Daily, was criticised for spending 6.6 million yuan since 2009 on electrical equipment that bypassed the government procurement process.

The People’s Daily itself drew fire for arranging meetings and entertaining guests in five-star hotels. [Source]