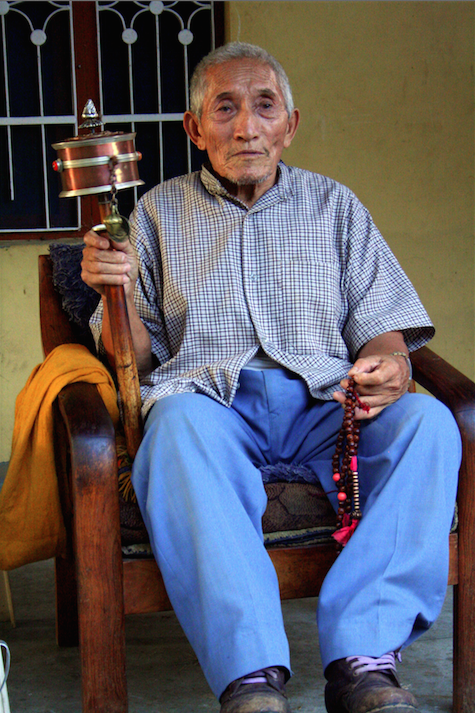 This is the final post in a four-part series. Read Part 1, Part 2 and Part 3. 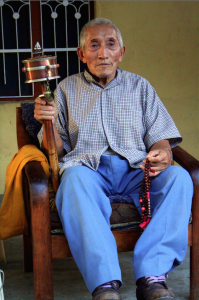 In the summer of 2010, writer and filmmaker Tang Danhong and the young Tibetan translator Sangjey interviewed older Tibetan refugees in India, people who had fled their homes as the People’s Liberation Army entered Tibetan areas and slowly tightened Beijing’s grip. Some of the interviewees joined the Tibetan volunteer army Chushi Gangdruk in its armed rebellion against the Chinese Communists, with the aid of the CIA. Others told harrowing stories of imprisonment, flight, and survival. The refugees Tang interviewed called this period Dulog Yung, the “Troubled Times.”

Tang hopes to make a documentary from the interviews, and welcomes correspondence from filmmakers via Twitter @DanHongTang.
Kyisang was born in the 1920s to a herding family in Jyekundo, Amdo (Jiegu Township, Yushu Tibetan Autonomous Prefecture, Qinghai). As a young man, he became the right hand man to the chief of the Lutri tribe in Nangchen, Kham (Yushu). Kyisang experienced the Chinese Communist Party’s wooing, then terrorizing of the Tibetan leadership. In his interview, Kyisang recalls his time in prison and his escape to India.

In the first part of Kyisang’s interview, he talked about the arrival of the People’s Liberation Army (PLA) and his imprisonment. Kyisang found a chance to escape when a soldier sent him unaccompanied to deliver a package of documents. All Kyisang had to do was take off his hat, and he looked just like a soldier. With this simple disguise, he approached a PLA camp.

I went straight to ask where I could find the head of the military camp. I found out he was in a big building. Once I found him, I placed that stack of documents in front of him and said, “I need to deliver these documents. They told me to borrow a horse from you here.” He looked over the papers and said, “Okay. Go take a horse from the stable.” I walked out of that building, and when I was approaching the stable, I was so excited that I felt like I was floating, flying through the air. I staggered along for a few steps, then stopped to compose myself. “Today my chance really has come!” I said to myself. I picked out the best horse in the stable, strapped a saddle on it and led that horse right out of the camp. As soon as we were gone, we galloped like crazy. We passed one ridge and sped off towards the deep mountains.

After riding for a while I came across an area with good grass and water. I let the horse graze while I walked alone to the top of a nearby peak to survey my surroundings. No one was coming after me. I thought to myself, if I follow the highway, I’ll surely be caught by the Han. So I decided to ride north. I rode for five or six days with nothing to eat. Riding a horse on an empty stomach, you can feel your lungs and liver tumbling around inside you; after a certain level of hunger, you start to see stars and your vision blurs. When I could absolutely go no further, I stopped to drink some mountain water. I could feel the water flowing directly from my stomach into my intestines. My steps grew heavier and heavier. In the past, I had heard stories about people riding into the wilderness and starving to death. I thought I’d surely suffer the same fate. I eventually came across a fur-lined jacket left behind by herders. I gnawed on the coat—it was all I had to eat for seven days. For seven days, I came across not a single person or village.

Along the way in the mountain valleys, I saw the remains of seven or eight people who had been killed. Only their bones remained—their flesh had been completely eaten away by wild animals. I used to fear dead bodies. After escaping from prison and seeing all those dead bodies on the road, I completely lost any fear I once had.

On the eighth day, I finally came across Ge’gyai Lhamo Gom Monastery. As I arrived at the monastery, someone screamed, “A Han is here! A Han is here!” I quickly yelled back, “I’m not Han. I’m Tibetan!” I told them I went to the meeting at Kyegundo, that the Han captured me, and that I had escaped from prison. They still didn’t believe me, so I began naming the chiefs and lamas who were detained along with me, I told them this one and that one were in prison, and they finally believed me. Then they gave me food. I told them I wanted to continue moving along, but they wanted me to stay, saying that if we came across any trouble, we would all be in it together. I told them, “If you want to flee, you can come with me, but if you want to stay, I’ll have to go on by myself.” They said they couldn’t leave at the moment. They then prepared tsampa, cheese, and jerky for me, so much I finally said, “I don’t need it, I don’t need it.” They still crammed food into my packs.

I kept riding for ten more days. Then I arrived at a place called Loblan Tang in Nagqu, Amdo, where I finally caught up to Lutri Sonam Dakpa and our tribe! They had heard I had died a while back. Some people said I’d been shot, others that I was beaten to death during a public denounciation. Because of this, they had already made funeral arrangements and had held Buddhist rites for me. They were so excited to see me, and we embraced. “I knew you were a fighter—I knew you’d get out!” someone said.

When I caught up with the tribe, Chief Lutri Sonam Dakpa said, “If we are going to fight back against the Han, we must carve a path of blood from here to India.”

…It was summer when we came to Gongarab, and the surroundings were very lush. Here we set up camp to rest. One day when the sun was about to set behind the mountains, we suddenly heard da da da–the sounds of gunfire, machine guns—coming from the Lutri Wangzin family encampment on the grassy slope across the way. After hearing the gunfire, the tribe’s brave men grabbed their guns and ran over. When they arrived at the Lutri Wangzin family tent, they saw Lutri Wangzin had already been killed. The whole family had been killed. Only Asha was still alive. The Han had already left the scene. Earlier that day, a small child from the Lutri Wangzin family had died, so they had invited one of the tribe’s lamas over to conduct funeral rites. Then the Han arrived and started shooting towards their tent. Lutri Wangzin said to Asha, “Go fight with my gun on your back and your gun in your hands.” Asha’s wife started running with her son in her arms. She was killed as she ran. Seeing this, Asha ran over, grabbed his son and continued fighting and running. He ran and ran until his legs could go no farther, and, taking a look down at his son, he saw that the child was already dead. The child’s intestines were falling out, wrapping around his legs… That little boy was very young, about two years old or so. He still couldn’t talk.

The dead of their household included Lutri Wangzin, Asha’s wife and child, as well as the lama who had come to conduct funeral rites and a yogi. All were killed. Only Asha survived.

We continued on to Luchu Wangpo, which was already not too far from India. One day, we saw a tent in the distance. It was a Han tent, with three PLA soldiers inside. Another was up in the mountains hunting. We charged over. The three PLA soldiers in the tent realized we were coming and came out firing, killing three of us. Minyap Dadrup and I charged to the very front, firing towards the PLA soldiers as fast as we could. But the closer we got, the worse our accuracy became. I said to Minyap Dadrup, “Is it that we’re not brave enough?” I had a good gun at the time. I steadied myself for a moment, took aim and fired. I heard that PLA soldier scream, “Wa!” I had killed him. We fired a few more shots, and the other side ceased their fire. It seemed they had run out of ammunition. Minyap Dadrup and I charged over and saw that one of the soldiers had been hit in the hand. Another was an officer. The insignia and badges on his shoulder and chest sparkled. We killed these two PLA soldiers. This officer had a large entourage with him, but none were at the tent. We took all of that officer’s belongings, including his uniform. We took three rifles and a machine gun. Minyap Dadrup took the machine gun. After that, we were no longer followed by any Han.

…Nowadays I read scripture and pray every day. Without sin there would be no good; committing sin can inspire one to do good. Doing good can negate sin. I killed many people in the past. I killed seven Tibetans alone. And I killed many while fighting with the Han. I even butchered many cattle and sheep. I am a sinner. Now I pray to escape the cycle of reincarnation, to attain Buddhahood.

Back when I was fighting, I once said to my comrades, “The Han Communists are the enemies of the Dharma, and especially the enemy of the Tibetan people. Not only is it not a sin to kill a Han, but it’s as virtuous as building a stupa. So we must kill as many Han as possible.” But I now think that while the policies of the Communist Party are bad, as individuals, we are all the same. Those Han Communists also have families, wives and children. And I truly regret it. I regret killing all of those Han.