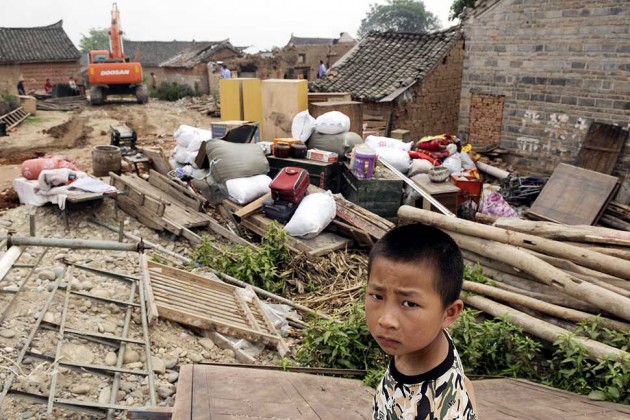 Originally thought up by Mao Zedong in the 50s and given Beijing’s go-ahead in 2001, the South-to-North Water Diversion Project had run a bill of $79 billion as of January, making it one of the world’s most expensive civil engineering projects. The ambitious three-phase project aims to divert trillions of gallons of water each year from the Yangtze River to the arid, distant, and rapidly desertifying north. While the it attempts to ease the challenges of China’s dire water crisis, a new set of challenges waits for the many who are displaced by its construction. From Christina Larson at Businessweek:

Beijing News looked at the fate of approximately 70,000 people relocated from homes in Hubei Province for the construction of the middle leg of the project, which aims to redirect water from China’s lush south to its arid north. The local government seems to be more aware of the importance of protecting migrants’ livelihoods, but that awareness hasn’t yielded simple solutions.

“It isn’t easy to tell people they must leave their homes,” Gufang Yan, a staffer at the Nanzhang Bureau of Immigration, told the newspaper. “Nobody gave us information about how to find a job; we did not know anything about recruitment,” said a man named Chen Yan, who was relocated for the project four years ago. […] [Source]

At Foreign Affairs, Sulmaan Kahn explains how faulty policies have long contributed to China’s water crisis. In the report, Kahn describes the history of the massive water diversion project, and points out more of its major shortfalls:

[…] Rather than trying to conserve water, the Chinese government has endorsed a massive project inspired by China’s first communist leader, Mao Zedong. The south had plentiful water, Mao reasoned in 1952, whereas the north did not; therefore, water should be diverted from the south to the north. In 2002, the Communist Party initiated a massive engineering project in order to realize this vision: a series of canals that will draw approximately 45 billion cubic meters of water from the south to the north. The first canal has already opened in eastern China. Two more — including a western route that will cut across the Himalayas — are underway.

It is true that water resources are distributed unevenly, with the south home to 77 percent of the country’s total water resources. Of the total water resources available in northern China, about 45 percent get used; the south needs to use only about 20 percent of its water resources. It is also true that as the north continues to grow, so will its demand for water. But there are several problems with Beijing’s water diversion policy. First, the ecological risks are immense. It is quite possible that the project will disrupt the river systems and exacerbate water shortages, rather than solve them, by triggering soil erosion and eliminating species responsible for maintaining a healthy river. The Three Gorges Dam provides a cautionary tale about tampering with natural forces: research shows that the dam caused an increase in seismic activity and landslides. Downstream of the infamous project, water shortages disrupted irrigation.

Second — and more important — the project solves nothing in the long term. If northern China’s inefficient water use continues unchecked, the 45 billion cubic meters piped in from the south will eventually be too little — especially with the rivers’ sources drying out. As Beijing diverts more and more water to the north, it will expose a long-standing political rift. In its long history, China has often split along north-south lines. Already, in southern places like Chongqing and Yunnan, one hears a growing complaint: Why should we southerners go thirsty so that the northerners can grow rich? As southern crops fail and people there feel the burden of water shortages, such complaints will only increase.

More generally, Beijing has yet to confront the many historical examples that suggest that water shortages can be a grave threat to national security. […] [Source]

Read more on China’s water crisis, forced relocation, or the challenges faced by the relocated, via CDT.