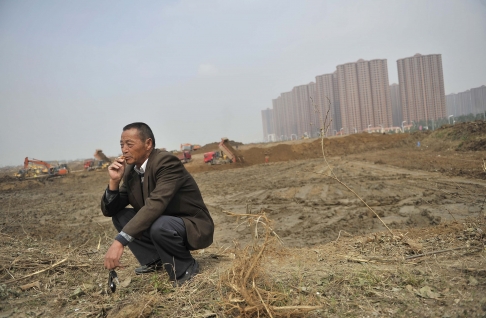 Agence France-Presse in Anshun (via The South China Morning Post) reports that, in the process of urbanization, China’s relocated poor have struggled to find employment in urban areas as local bureaucrats “just follow the plan without seriously considering the local situation”:

By 2030, projections say one billion Chinese will live in cities (up 300 million from now), nearly equal to the population of the United States.

Beijing hopes that if the urban influx earn and spend more, it will both reduce poverty faster and help switch the economy to growing through consumption rather than investment.

But if local governments simply build the shells of cities with no economy that former farmers can participate in, they may simply be digging a deeper investment hole – and creating neighbourhoods full of idle inhabitants.

“This is certainly something I’ve seen in other places, where you have people cut off from the way they’ve made their living their entire life. Then there’s nothing really that they can do,” said Tom Miller, the Beijing-based author of China’s Urban Billion. [Source]

Moreover, as the population in China’s urban areas continues to rapidly expand, the availability of resources like clean water may become an even greater problem; hundreds of thousands of people have already been forcibly relocated due to water needs.   At Quartz, Lily Kuo reports on China’s South-to-North Water Diversion Project (SNWDP), a “high-risk gamble” which aims to move  44.8 billion cubic meters of water across the country every year:

China has a severe water problem overall. Its resources of freshwater, around 2,000 cubic meters per capita, are one-third of the global average. Coal production, which supplies about three-quarters of China’s energy, already accounts for one-sixth (pdf, p. 3) of total water withdrawals. Between now and 2040 China’s total energy demand is expected to more than double, and be twice that of the US (slide 26). The World Bank has put the annual cost of China’s water problems—specifically, water scarcity and the direct impacts of water pollution—at 2.3% of GDP (pdf, p. xxi) but says it is likely much higher. About 45% of the country’s GDP comes from water-scarce provinces, according to a 2012 report by HSBC and China Water Risk, a consultancy. About 300 million people in China, almost a quarter of its population, drink contaminated water every day. Former Chinese premier Wen Jiabao wasn’t being dramatic in 1999 when he called the country’s water problems a threat to the “survival of the Chinese nation.”

[…] The solution, as Mao Zedong first said in 1952, is to “borrow a little water from the south.” Southern China is home to four-fifths of the country’s water sources, mostly around the Yangtze River Basin. It took another 50 years after Mao’s suggestion for China to start work on it. Finally, on Dec. 10, the first phase of the South-to-North Water Diversion Project (SNWDP) or Nanshuibeidiao, began operating.

The project’s eventual goal is to move 44.8 billion cubic meters of water across the country every year, more than there is in the River Thames. The infrastructure includes some of the longest canals in the world; pipelines that weave underneath riverbeds; a giant aqueduct; and pumping stations powerful enough to fill Olympic-sized pools in minutes. It is the world’s largest water-transfer project, unprecedented both in the volume of water to be transferred and the distance to be traveled—a total of 4,350 km (2,700 miles), about the distance between the two coasts of America. The US, Israel, and South Africa are home to long-distance water transfer systems, but none on this scale. [Source]

See also a report at ChinaFile which ventures that the South-North Water Transfer project is “not sustainable.”