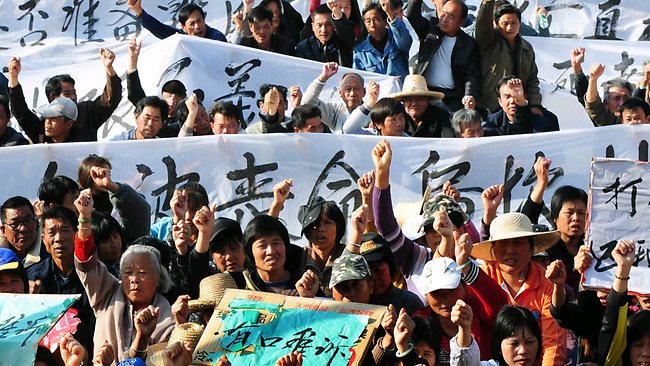 The Guangdong village of Wukan won global fame and some democratic concessions in 2011 when residents demonstrated against a land grab by local officials. Further protests came this year after the detention and subsequent bribery trial of Lin Zuluan, an organizer of the original demonstrations who was subsequently elected as village chief. On Monday, nine villagers received prison sentences of up to ten years for their parts in this year’s unrest. From South China Morning Post:

Villagers in Wukan, 170km northeast of Hong Kong, expressed frustration over the sentencing, which critics said was a warning to others not to stage similar demonstrations.

The nine jailed villagers did not organise the protests, but were among the more ­vocal participants, one resident in his 20s said, refusing to be identified for fear of persecution.

“They just tended to speak up more during the protests. People all spoke a lot,” the villager said.

“Ten years is too much. We are not criminals,” he said. “And the land dispute remains unsolved.”

The People’s Court in Haifeng county said on its website late on Monday night that it had sentenced nine Wukan residents for between two and 10 years for ­disrupting public order, staging ­illegal demonstrations, disturbing traffic and intentionally spreading false information. [Source]

Zhuang Liehong, the son of one of the defendants, was one of around a dozen Chinese activists demonstrating outside Trump Tower in New York earlier this month, calling on the president-elect to pay attention to human rights in Wukan and China as a whole. This week, Zhuang gave Radio Free Asia more details on the prosecutions:

Prosecutors said fellow protester Zhang Bingchai had “published false information via WeChat and manufactured rumors, which had a deleterious effect in the community.”

Wei Yonghan and Yang Jinzhen were found guilty of “organizing and inciting the villagers of Wukan to attend illegal meetings, demonstrations.”

Wei was also convicted of inciting villagers and “other members of the public” to confrontation with police, throwing stones and bricks at them, and injuring police officers on duty.

Meanwhile, protesters Li Chulu, Cai Jialin, and Zhuang Songkun “rode their motorcycles to intercept passing vehicles, causing serious disruption to traffic,” according to an indictment notice issued by the Haifeng District People’s Court, which tried them.

[…] According to Zhuang Liehong, a second group of 13 defendants is currently awaiting trial at a detention center in Lufeng county. [Source]

In an essay in the latest issue of “Made in China,” a quarterly from the Australian National University’s Chinoiresie website, ANU’s Luigi Tomba argued that Wukan and cases like it are “potentially much more significant for prosperity, stability, and justice in China than for its democratic future.”

[…] About two-thirds of the estimated 187,000 collective conflicts a year across the country have something to do with land. Last year, land also replaced corruption as the main area of dissatisfaction in the government’s work among Chinese citizens, probably suggesting that, while the centrally engineered anti-corruption campaign is generating positive vibes, the aggressive stance of local urban governments (and the growing prices of real estate) is increasingly becoming a focal point in China’s public opinion.

[…] This incident, and the massive contestation in the village between 2012 and 2016 is a very visible sign of China’s rural malaise. Urbanising China is a massive attempt to nationalise its territory, to absorb collective economies that have in the last two decades been at the centre of China’s industrialisation. It is driven by the structural needs of urban governments and observed with continuous apprehension by central authorities, always ready to tailor their intervention to the different realities of urbanisation in the country, to quell conflicts when they risk spilling beyond their local dimension. To look at Wukan as an experiment in local democracy would be too generous an evaluation [….] [Source]

China Media Project’s David Bandurski also discussed Wukan earlier this month in an LA Review of Books interview with Jeffrey Wasserstrom about Bandurski’s book, “Dragons in Diamond Village: And Other Tales from the Back Alleys of Urbanising China.”

This experiment was, in my view, doomed from the start. How could the elected leaders possibly hope to resolve these land issues when leaders at every level over their heads had been complicit, and not only hoped their experiment would fail but had a clear interest in seeing land deals of this kind continue? The Financial Times reported in 2011 that 40 percent of local government revenue in this part of Guangdong came from land financing, basically the sale of cheap village land to property developers. In many cities, the percentage is even higher, and the incentive to take village land for profit is a huge driver of the kinds of cases of abuse and resistance I document.

[…] As I suggested earlier, cases of abuse in urban villages are actually far more common than coverage, particularly in English, would lead you to believe. The execution of villager Jia Jinglong was recently in the international headlines about China. Jia’s crime was to murder the man responsible for the forced demolition of his home. That demolition was part of an urban village regeneration project started back in 2009, and very similar to the one underway in “Diamond Village.” Another recent headline in the New York Times read: “A Chinese Farmer’s Execution Shows the Pitfalls of Rapid Urbanization.” But it’s about more than just urbanization. It’s about lack of real rule of law, and lack of mechanisms of consultation like those hoped for in Wukan. [Source]

Given the repeated international focus on Wukan, the trial’s timing during the Christmas holiday was likely no accident. On Christmas Day, The Guardian’s Benjamin Haas examined Chinese authorities’ apparent use of such holidays to duck foreign attention in sensitive cases, focusing on the scheduled trial of Sichuan activist Chen Yunfei on December 26. (In the event, the trial was postponed after Chen dismissed his lawyers.)

In the most famous case, Nobel peace prize winner Liu Xiaobo was sentenced to 11 years in prison on Christmas Day 2009. Last year, free speech champion Pu Zhiqiang was given a three year suspended sentence on December 22 and Yang Maodong and Sun Desheng were both convicted during an all-night trial at the time of the American Thanksgiving holiday in November 2015.

“The Chinese government tries to give the impression that they don’t care about the world’s opinion,” Nee said. “In fact the government is very concerned about international public opinion and how people see the rule of law in China developing.” [Source]