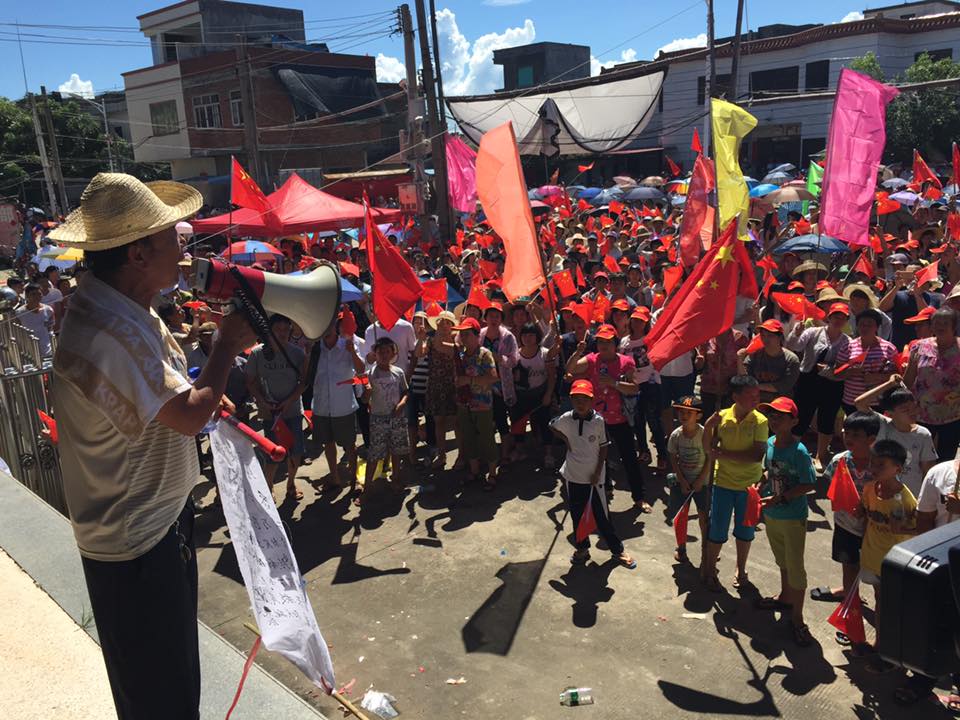 In September of 2011, villagers in Wukan, Guangdong, launched an anti-corruption protest after local officials sold public land to developers without proper compensation. When a protest leader died in detention that December, public anger boiled over, and continuing demonstrations eventually led to local elections free from the Party interference that has long characterized the selection of village committees. While the protests and democratic concessions originally won wide public support, by 2014 many Wukan villagers had become disillusioned with the democratic experiment, and former leaders regained their influence in local politics after many of those elected were forced from office. Nearly five years after the initial protests, many villagers remain angry that their farmland was never returned.

2011 protest leader Lin Zuluan, elected to the position of village committee chief in the February 2012 elections and reelected in 2014, was detained on Saturday, and more than 2,000 villagers rallied to call for his release and for the return of their farmland over the weekend. Reuters’ James Pomfret reports:

Villagers gathered near dusk after listening to a speech from a public stage, waving red China flags and calling for the return of seized land and the release of Lin Zuluan, a former protest leader who was directly elected village chief in 2012 and who has since been accused of abuse of power and accepting bribes.

More than 100 riot and paramilitary police in helmets and shields watched as the villagers, young and old, streamed around the village perimeter in a long procession, some jeering at the officers as they went and pumping their fists in the air.

“Do not assemble and protest again,” notices posted by the regional government in the village read.

[…] Groups of young men on mopeds and motor-bikes were tasked with guarding the perimeter of the village and ensuring a group of several dozen journalists holed up in the village chief’s three-storey family home wouldn’t be taken away by authorities. […] [Source]

Reporting on the reemerging unrest in Wukan, AP interviewed Wukan villagers on this weekend’s demonstrations:

One resident estimated that up to 2,000 people took part in the demonstration in the village of 20,000. The resident, who wanted to be identified by only his surname, Peng, because of the sensitivity of the issue, said they chanted slogans such as “Release the village chief” and “Return our land.”

[…] Peng said that there had been no protests over the land grabs since Lin became leader, but that most of the land had not been returned to the people.

Peng and another resident, who gave only his surname, Fan, said that the hundreds of security personnel stationed in the village since Friday, including armed police, anti-riot police, local officers and soldiers, did not stop Sunday’s protest, and that there were no clashes or arrests.

Fan said that people marched toward the Wukan police station. An officer reached at the station said he was too busy to talk.

Fan said that some residents had suggested they would take to the streets again Monday. [Source]

A villager who posted on WeChat about #wukan has just been arrested. https://t.co/XfndHoTQCA

At The New York Times, Austin Ramzy reports on the official statement regarding Lin’s detention, and on state media silence and social media censorship about the continuing demonstrations in Wukan:

The Public Security Bureau for Lufeng, the city that oversees Wukan, said in a written statement on Saturday that Mr. Lin was being held on suspicion of abuse of power and accepting bribes. But some villagers believed he was being held because of his plans to call a meeting about the unresolved land dispute and to petition the higher authorities to help resolve the matter, said Hong Ruiqing, a resident.

[…] On Monday, the number of riot police officers in the village appeared to have diminished, the witnesses said. But there was a demonstration again on Monday evening.

Messages on Chinese social media that mention Wukan have been censored in recent days, according to Weiboscope, a monitoring service run by the journalism school at the University of Hong Kong.

The mainland Chinese news media has scarcely mentioned the situation, but Global Times, a newspaper owned by the Communist Party, argued that the village’s experience showed that democracy was insufficient for solving property disputes. [Source]

Over the years, some observers in and outside China intentionally politicized the Wukan case and hitched it to grass-roots democracy and relations between the authorities and people. This is simplistic. What lies at the crux of the Wukan problem are disputes about land and property, similar to many other cases across China that are centered on land compensation or grabs. The Wukan villagers had no trust in the previous village committee and wanted a new one to speak for their interests.

But disputes over property rights cannot be solved merely through democratic means. Land problems are a frequent reason why people petition, and this has caused difficulties for authorities across China. What’s special about Wukan is that its villagers are intrepid and headstrong, who cannot be easily talked down. In this sense, handling the Wukan problem well means much to the rest of China.

We believe the progress of Wukan since 2012 should be cherished and villagers should be encouraged to conduct consultations with the authorities in a rational manner. People need some knowledge of the difficulties in addressing land-related disputes and support relevant parties to make some compromise. Encouraging confrontation or radicalism should not be allowed.

If the drastic actions of the Wukan villagers are adopted by other people involved in disputes, China will see mess and disturbance at a grass-roots level. This jeopardizes the common interests of Chinese society.

The disputes in Wukan may eventually be solved in accordance with the law and only villagers’ lawful demands will be met. [Source]

The South China Morning Post reports from Wukan, where villagers are planning to continue their rallies on Tuesday morning. Speaking to villagers through his wife, Lin Zuluan has urged Wukan residents to carry out protests in accordance with the law:

Lin’s wife, Yang Zhen, has also been dragged into the affair. An official claiming to be from the Shanwei prosecutors’ office called her, and put Lin on the phone, apparently in the hope he would dissuade her from leading villagers in their protest, but the plan went awry. “Do what you think is right as long as it’s legal,” Lin told Yang over the phone, in a conversation she recorded. “If someone is trying to arrest you, do not go easy on them.”

But he also added: “Do not go to a protest just because others told you so.”

[…] Thousands of villagers protested on Sunday, and hundreds on Monday signed huge white banners calling for Lin’s release. “We must press ahead with the protest. We believe Lin took the blame for us. He is innocent,” said a villager who asked not to be identified.

But some villagers said government pressure was increasing and they were having second thoughts about taking part in today’s march. At least six villagers had been summoned by police, and two were detained – Lin’s grandson Lin Liyi, 21, and deputy village director Cai Lichou, they said. The window of Lin’s office was broken but it was not clear whether anything was stolen. [Source]

Also see video footage from the continuing Wukan rallies from the SCMP.