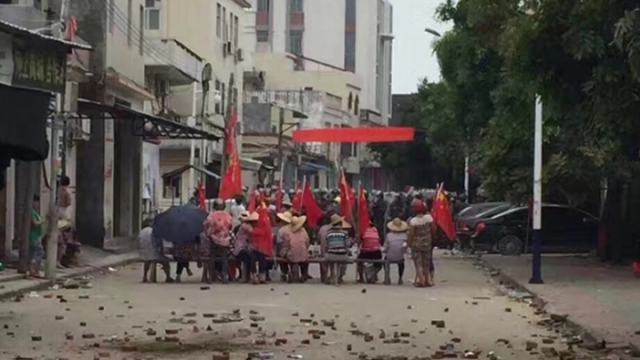 A government crackdown in Wukan is once again drawing international media attention to the small fishing village, five years after its residents first made global headlines for rising up against land seizures which forced local authorities to back down and grant local elections free from Party oversight. New protests erupted in June after officials arrested former protest leader and elected village chief Lin Zuluan, who has been sentenced to more than three years in jail on corruption charges for allegedly taking bribes. Violent clashes between the protesters and riot police broke out last week, resulting in a village-wide lockdown and door-to-door manhunt for suspects accused of disrupting public order. At The Diplomat, Cal Wong details the harsh crackdown in Wukan and the violence that has characterized the end of the village’s democratic experiment:

Violent protests erupted on September 13, after a dawn raid by local authorities rounded up 13 people in Wukan. They were charged with illegal assembly and using threats to force others to protest in the aftermath of Lin’s sentencing.

Up to 1,000 police officers equipped with tear gas and rubber bullets were then deployed after the dawn raids last week. They were searching for six suspects close to Lin, including a number of his family members. The police faced off against protesting villagers armed with broken bricks and little else. Unconfirmed reports say more than 100 villagers have been arrested; some have reported police using live ammunition on protesters and also the death of an elderly woman in her 80s, caused by rubber bullets. Paramilitary police have been going from door to door searching houses for suspects.  Authorities have offered RMB10,000 ($1,500) cash reward offered for tip offs on the six suspects.

The village is under lock down with many fearing to leave their homes. Officials have blocked visitors and food supplies from entering into Wukan forcing resident villagers to sneak across to neighboring villages to obtain food supplies.

[…] Wukan has yet again become a testing ground for the central Chinese government. It is highlighting the deficiencies in not only China’s human rights record, but also brings into question the level of coordination between often corrupt municipal authorities and national authorities. Wukan village is once again receiving too much global media attention, and that means the central government is forced to deftly deal with what should be a local government issue. While Lin has already been sentenced, more heads will roll in the coming months. [Source]

At Bloomberg News, Ting Shi looks at why recent developments in Wukan–the village once seen as a cradle of grassroots democracy in China–can serve as “a cautionary tale for the nation’s democratic reformers,” citing systemic obstacles to the development of direct democracy in the country.

The detentions underscore the collapse of what rights advocates once saw as a “Wukan model” for encouraging direct elections at the village level in China’s one-party political system. Once voted into power, the inexperienced village leaders struggled to convince more senior Communist party officials to return land sold by the previous committee. Bickering, protests and corruption allegations further undermined their effectiveness — and minimize the risk that demonstrations will spread to other localities.

[…] “The implementation of grassroots democracy is often flawed and faces multiple problems, for example a fragile social foundation and weak sense of the rule of law among both the local government and the people,” said Hu Xingdou, an economics professor at the Beijing Institute of Technology who studies rural China.

Even before the corruption allegations in Wukan, which has about 13,000 people, the village’s old guard was making a comeback. In 2014, three members of the ousted village leadership were appointed to the party committee. As tensions mounted, another former protest leader quit government and left for the U.S. amid fear of retaliation.

[…] “There remain deep contractions between local governance and hierarchical control, as well as contradictions between the economic interests of villagers and the economic and state interests of systems within which village communities exist,” said Andrew Wedeman, director of China Studies at Georgia State University. “I thus do not necessarily see Wukan as a harbinger of things to come so much as evidence that, the more things change, the more they stay the same.” [Source]

A former Wukan protest leader who fled to the United States in 2014 has staged a series of protests outside the United Nations Headquarters and the Chinese consulate in New York to express his objection to the crackdown in the village:

Zhuang said that communications in Wukan are being heavily censored, making it difficult for the villagers to send images and videos to the outside world.

He added that security forces are stationed throughout the village. Mainland media reports that there is peace in the village are false, he said.

Zhuang fled to the United States in 2014 after leading protests in the village against land grabs and corruption. His parents remain in Wukan.

Zhuang said that he could not contact his mother because authorities had confiscated her cell phone two days ago. He has not heard from his father either, who was taken away before the crackdown on protests, according to Zhuang. [Source]

A number of activists who showed solidarity with Wukan protesters have been jailed and questioned for their activism. At the same time, many in Hong Kong attended a candlelight vigil to protest the Chinese government’s handling of the recent Wukan demonstrations. A Global Times op-ed by Shan Renping (a pen-name of editor Hu Xijin) labels the vigil a prop used by Western media to “stoke unrest.” Yang Fan, Qiao Long, and Lau Siu-fung at RFA report:

Wu Bin, an activist known online as Xiucai Jianghu, said Huang was detained by officers from Shenzhen’s Buji police station on charges of “spreading rumors” on Sept. 14 after she posted a Voice of America report on the Wukan crackdown protests to social media.

[…] Meanwhile, dozens of rights activists and democratic politicians in Hong Kong staged a candlelight vigil in support of Wukan.

[…] “Today we have Wukan, tomorrow this sort of violence may occur in Hong Kong,” Kwok told the 100-strong rally, who chanted “release Lin Zuluan and all Wukan villagers” and tied black ribbons to the fence outside Beijing’s representative office in the former British colony. [Source]

Five journalists from Hong Kong reporting in Wukan were also assaulted and detained last week as authorities worked to stem the news of the protests from spreading. Chinese authorities have since disputed key facts surrounding the journalists’ detention and mistreatment.

In an analysis of news articles and web stories on Wukan published by Chinese media since September, David Bandurski at China Media Project reveals that local authorities have not only worked to remove foreign media presence but also played an active role in shaping the narrative of events unfolding in Wukan.

In retrospect, the Nanfang Daily story — reprised elsewhere, including the tabloid Southern Metropolis Daily — seems a cynical and perverse ploy. Consider, for example, that around 3AM on September 13, the morning after the appearance of the aforementioned story, police conducted surprise raids on village homes, rounding up those suspected of organising fresh protests over dirty land deals. And then listen to Wu Jianjun, chief of the Frontier Defence Corps in the city of Lufeng, quoted in the harmonious Nanfang Daily story: “Our task today is mostly to do a major dragnet clean of Golden Harbour Avenue and New China East Street. Then we need to disinfect the flower plots, sewers, garbage cans and other key areas, ridding them of rodents.”

[…] Side by side, this pair of articles suggests two important things. First of all, it appears that there was strong vertical coordination in Guangdong over the issue of Wukan, with endorsement through the provincial newspaper of the approach taken by the Shanwei leadership. Second, it appears that authorities at the city level were given a free rein not just in handling unfolding events in Wukan but also in doling out the facts.

This second point is an especially interesting one in light of the larger politics under President Xi Jinping. Within the sphere of China observation, we often talk about Xi the “strongman” consolidating his grip, Xi “as the core,” or Xi as the COE, the “chairman of everything.” Xi’s centralising grip on the media, which must all be “surnamed Party,” is a crucial part of this consolidation. And yet it seems, in the case of Wukan, that local leaders are being empowered to conduct “public opinion warfare,” to borrow a phrase from the most recent commentary from the editor-in-chief of the Global Times. [Source]