Case Against Zhou Yongkang May Be Revealed Soon 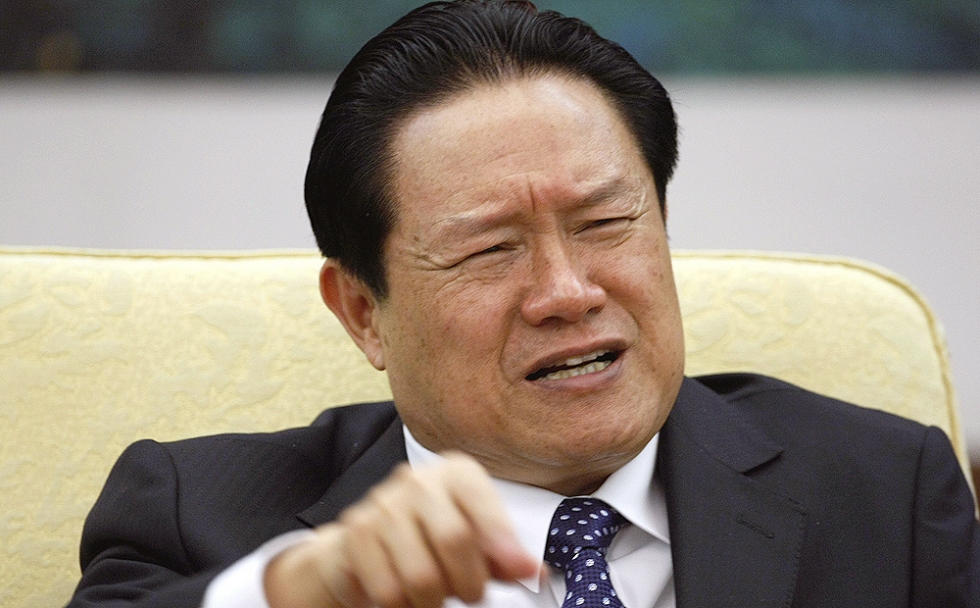 Reuters reports that yet more former aides of former security chief Zhou Yongkang have been expelled from the Communist Party for graft, the latest in a string of Zhou’s allies to fall in Xi Jinping’s anti-corruption campaign. More than 300 of Zhou’s family members and associates have been questioned or arrested in the probes.

[…] Several of Zhou’s political allies have been held in custody and questioned over corruption, including former Vice Minister of Public Security Li Dongsheng and Jiang Jiemin, who was the top regulator of state-owned enterprises for five months until last September.

The official Xinhua news agency said criminal investigations had been opened into Li and Jiang, along with another official, Wang Yongchun, who was a vice president of China’s biggest oil company, China National Petroleum Corporation, the parent of PetroChina. [Source]

Speculation is mounting that the coup de grace against Zhou may be near. The South China Morning Post reports that findings from the graft investigation against him may be revealed during an earlier-than-expected fourth plenary session as soon as next month.

Sources said the authorities were worried the disgrace of Zhou, who was in charge of law and order for more than a decade, would shake the public’s confidence in the legal system.

Party leaders have decided to put more emphasis on the rule of law during the plenary session, said the sources, who include senior law enforcement and propaganda officials. The leaders also intend to defend the probe into the former Politburo Standing Committee member, saying the inquiry followed the party’s constitution and was not driven by a political power struggle.

[…] The sources said party leaders had decided to emphasise the rule of law during the plenary session to ease public speculation that investigations into disgraced officials were purely political purges.

“The top leader wants to show that the campaign against corruption is for the benefit of the party and the public, not to pursue his own interest in opposing anyone,” a source said. [Source]

Many observers are unpersuaded. Earlier this month, Bloomberg’s Ting Shi reported suspicions that Xi is maneuvering for advantage ahead of the next major leadership transition in 2017:

“All major party factions have started making arrangements for the next round of power transition,” said Zhang Lifan, a Beijing-based historian who previously worked at the Chinese Academy of Social Sciences and whose father was persecuted in the Cultural Revolution after being a vice minister. “Xi needs to accumulate political capital within the first few years in office so he can be in a strong position in 2017 to push his agenda.”

[…] The party in 2017 will hold its 19th congress, when all of the seven Standing Committee members except Xi and Li are scheduled to retire, having reached the age of 68. Six out of the remaining 18 members in the Politburo, the second most powerful body in the hierarchy, are also due to step down by then. [Source]

At The Jamestown Foundation, Willy Lam suggested that the Communist Youth League faction led by Xi’s predecessor Hu Jintao could be next in the crosshairs.

Speculation that Xi is using the corruption crackdown to clear the way for his own allies will hardly be dampened by the results of a Party Organization Department study announced last week. The department found that nepotism often determines cadres’ ascent through the Party ranks, trumping the organization’s vaunted meritocracy. From Dexter Roberts at Bloomberg Businessweek:

Nepotism and corruption are commonplace and meritocracy often absent when selecting cadres, concludes a survey published in the People’s Daily on July 6. More than 3,000 local cadres in 16 provinces responded to the survey questionnaires distributed by the party department responsible for personnel.

The investigation showed that, when multiple candidates vie for a spot, top party leaders use their influence to ensure those they favor win promotion. Buying and selling positions in the party is also commonplace, the survey noted.

“All this corrupt and unfair behavior that the study cited has existed in the selection and appointment of officials for decades,” said Professor Cai Lihui, a political analyst at Guangzhou’s Sun Yat-sen University, reported the South China Morning Post on July 7. “It’s the result of a lack of checks and balances in China’s government. No one can limit the power of the officials and the party.” [Source]